Sales are brisk.  Just look at the newspaper or the TV or listen to the radio if there’s a station in range that still does news.
Ever wonder what happens when two opposing chapeauporators meet? 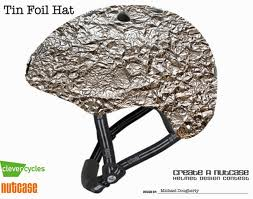 That’s what happened at the Capitol the other day.  This young woman, Miriam Carey, who got messages that he never sent from President Obama was cut down in the prime of her disturbed life by police officers who may or may not have received shoot-to-kill orders through *their* tin hats.  Now a pretty young woman with a one year old baby is dead for no reason.

She look dangerous?  Didn’t think so. She’s said to have had serious mental problems… postpartum depression among them. We used to confine people -- warehouse them, really -- like that.  Now we shoot them?

So this blurry minded woman and the equally blurry minded cops have a shootout. And since she doesn’t have guns and they do, she loses.

But the paranormal messages and messengers are not limited to either.

The Teabags are getting some input from their tinfoil hats too.

First, a clarification:  A friend objects to the use here of the word “Teabags.”  The inference is that we’re being derogatory.  Yes, it’s derogatory in the same way that when the Teabags refer to the opposition, they call it the “Democrat Party” instead of the Democratic Party. Just politics.

OK, so the teabags are getting their messages through their antennae either from God or from each other.  They refuse to compromise and then accuse the president of refusal to compromise.

They take a quirk of Robert’s Rules of Order and hundreds of years of congressional tradition and attach other-worldly amendments to basic legislation, thus forcing the executive branch into a corner.

What does he mean?  He means no straightforward vote on the debt ceiling.  He means he’s going to tack on the usual irrelevancies.

What will the bill look like in final form?  Well, it’ll raise the debt ceiling allowing us to pay our bills.  But then there will be the usual adds: defund the Affordable Care Act, make the first Monday in May National Dalmatian Day, build a couple of bridges to nowhere in Arizona or Wyoming.

So you’ll say Boehner isn’t a member of the Teabags, he’s a moderate Republican working to help the country.

Someone help this guy tune his hat.

--Maybe we should get Putin to help Washington.  He seems to have wiggled us out of the Syria crisis of the moment.  Or maybe Kim Jong Un if he isn’t busy… because that crisis seems also to have calmed.

I’m Wes Richards. My opinions are my own but you’re welcome to them. ®
Please address comments to wesrichards@gmail.com
© WJR 2013