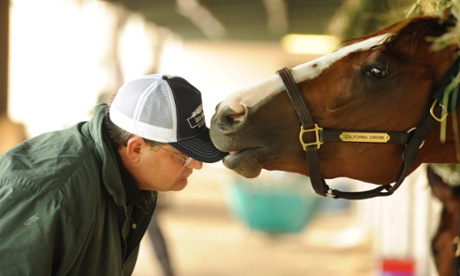 California Chrome was “sure” to become the first horse since 1978 to win the Triple Crown, probably the most important and most sought-after achievement in the sport of kings.

Chrome won the Kentucky Derby and the Preakness with room to spare and that ain’t hay.

Not every horse runs in all three Triple Crown races.  The winner, Tonalist, ran only in the Belmont.  Same is true of the place (2nd finishing) horse, Commissioner.  The show (3rd place) horse, Medal Count, ran in the Derby but skipped the Preakness.

So, Chrome finished in a dead heat for fourth with Wicked Strong.

Chrome has working class roots. And he captured the imagination of people far and wide because he is beautiful and he fits that wonderful rags-to-riches kind of story we all love to hear or watch unfold.

Win or lose, the story of the day was going to be California Chrome. And you could hear and read in the faces of the owners and the trainers and the crowd the disbelief and disappointment as Chrome was forced to the outside and these nobodies pulled ahead. And that crowd? One hundred thousand people come out to watch a horse race?  For the Belmont, often. For the Belmont where a Triple Crown is at stake?  As sure as gravity.

But Elmont, New York is where racing hopes come to die. And die they did this past Saturday.  This track is not only long and sandy.  It is brutal.  And when it comes to this kind of race, there is no overtime or extra innings. There is no “next season.” There are no drafts, no player trades, no switches in managers or owners or trainers or jockeys.

You’re only three once.

So what’s next?  Well, not to worry. It’s not the glue factory.  It’s the stud farm.  This is where a lot of great horses make their real money. Except those peasant roots are going to get in the way.

Eric Mitchell, writing on the website Bloodhorse.com says it’s tricky.  According to Mitchell, Chrome’s value depends on his ability to sire top class runners for many years.

--Note to co-owner Steve Coburn:  Shut up. You lost. Your sour grapes rant is tarnishing your horse, your sport (which has enough problems without you piling on more) and you’re making yourself look like the back end of a junk wagon nag.