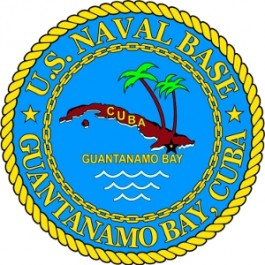 All this talk about the future of the Guantanamo Naval Base.  It’s home to our most hated and feared prisoners, terrorists from around the world.  And there’s almost constant debate about what should be done with them and maybe with the base itself.
The United States has leased the place since 1903, although the Cuban government doesn’t cash the rent checks. Most of us would kill for a landlord like that.
Unlike Britain’s lease of Hong Kong, there’s no expiration date.  Their lease was just a lease.  Ours is a treaty.
We’re making less than ideal use of the thing.  We could be collecting rent of our own.
How?
By following the example set by Israel in its territories:  Build settlements.
The Naval base is 45 square miles.  It’s about the size of Grand Rapids, Michigan.  Not huge.  But not that crowded.  The non-confined population is something like 6,000.
Continuing the comparison, Grand Rapids’ population is around 200,000.
You can see the ads now: Retire to Guantanamo.  Beautiful weather.  Beautiful ocean front. Beautiful subsidies.
Not kidding about that weather. Aside from a few thunderstorms that’ll temporarily knock out your Dish or Direct TV, it’s balmy and tropical the year round. No snow.
The average temperature runs from 68 degrees to about 90 depending on the month.  Gets a little cloudy from September to early December.  But so what?
It gets a bit humid from late spring to early fall, but your new settlement home will be centrally air conditioned.
And it’ll be built stronger than the third Little Pig’s house, so the hurricanes can huff and puff all they want but they won’t blow your house down.
So, no shoveling.  (Eat your heart out, Grand Rapids.) No lawn mowing.
Won’t be long and some airline will start direct flight service.
Won’t be long -- with enough retirees -- someone will open a casino.
Won’t be long before Wal-Mart opens a branch.
Won’t be long before Verizon and AT&T put up cell towers if they haven’t already.
And with all those Navy folks, you can bet the crime rate is way below any city in Florida or Arizona or Michigan you can name.
And no alligators.
No state income or sales tax because it’s not in a state.
Don’t worry about Cuba.  It has enough of its own troubles to mess with you. Plus, yours will be a gated community.
Don’t worry about the terrorists.  No one’s ever escaped from that prison.  Plus if they ever close it, it’ll mean all the more room for that hotel someone is likely planning.
At some point, also following the Israeli example, we’ll at least technically be able to take over the base.  We’ll offer Havana fair market value, they’ll agree.  And as it is with the lease, they won’t take our filthy yanqui money.


Shrapnel:
--We’ll eventually have something to say about the vote in Scotland.  But for the moment, this news: the “historic” St. Andrews club has voted to admit women golfers for the first time in its 260 year existence.
--Good for them. Why should men suffer the agony of golf on their own?  Let the girls feel our pain and frustration.
I’m Wes Richards. My opinions are my own but you’re welcome to them. ®
Please address comments to wesrichards@gmail.com
© WJR 2014