It’s 5 PM.  A turtle, an octopus and a fish walk into a bar in Australia.  The turtle orders a Sloe Gin Fizz, the Octopus wants only a Coke (“I never drink before eight”) and the fish orders a Johnny Walker on the rocks.


Wait a minute.  Fish can’t walk into a bar or anywhere else. Uh… yes they can. Meet Australia’s Climbing Perch. 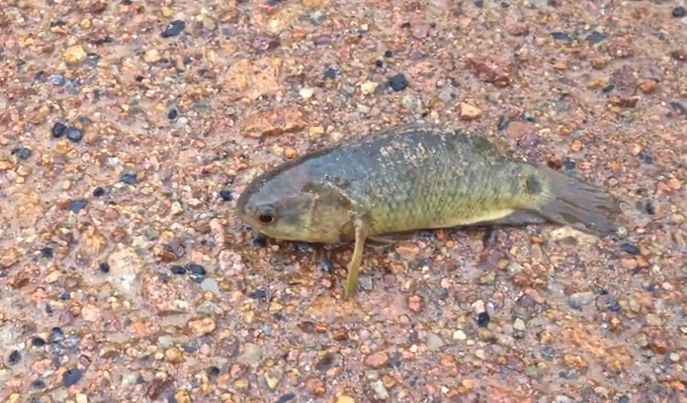 Ugly little guy, no?  But still, a walking fish.  A fish that can go six days without water.  A fish that can hibernate on the beach for six months.
This all may be news to most of us, but the walking fish was first discovered in 2005 by Australians out for a stroll of their own. No one said much about it at the time. Before now, scientists had to assure themselves and others that they weren’t hallucinating after a night filled with Foster’s Oil Cans The perch has sort-of lungs with its sort-of gills and can walk using those gills for sort of  feet and legs.


They’re probably working on a four footed model as we speak.  Problem:  Like most bar- fish, this guy is pugnacious. He threatens and sometimes endangers water fish and can live on both a salt free or salt-plentiful diet.


And although they can’t fly -- yet -- they’re dangerous to the birds that try to swoop down and eat them.  Those gills/feet get stuck in the birds’ throats and chokes them.  Well, no… not exactly.  When the bird catches the fish, the fish expands its gills and THEN the bird chokes. No word yet on whether the fish can then roast the bird.  Probably not.  That would require a cooperative critter capable of starting a fire.


Or maybe Australian kangaroos come equipped with Bic lighters in their pouches and just have to be talked into sharing a light in return for a share of the carcass.
So, makes you kind of wonder what else is out there under our noses that we just haven’t yet noticed. Flying hippos?  Talking mules? Individual monkeys that don’t need a lot of company to type King Lear on an iPad?


Because of a perceived threat to Australia’s ecosystem, fishermen are being cautioned to inspect their catch and toss back the perches.  After all, the bars in Australia are crowded enough with all those turtles and octopi.


--Happy Birthday to the Wizard of Oz movie, so often quoted or referred to in this space.  It’s 76 years old. And while it’s not true to the book (what movie is?) it’s close enough for Wessays™.


--The FDA has approved the pill that is said to increase female sex drive.  That means, guys, your Sundays of continuous football are over.  Because if she doesn’t get enough at home, she’ll find someplace else.