1328 Reflections on Winter Past and a Budget Surplus

Some time back, we talked about some of the Catch-22-isms of condo life.  Here comes another, and it won’t be the last.


For the past seven winters, a giant icicle, maybe seven or eight feet tall and several hundred pounds, has grown from the roof.  All attempts to dislodge it have failed.  Saws, hair dryers, a blow torch… nothing makes dent in this thing. (More) 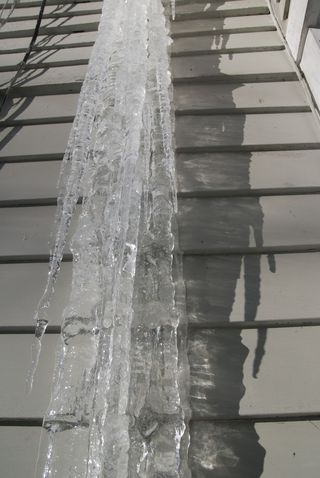 I’ve reported it to “management” dutifully each year and each year, my reports have been ignored.  After all, it’s on the back of the house where real important people can’t see it.


Eventually, the weather warms and it falls off, usually hitting the ground harmlessly if no one is standing too near or has left a baby or a Ming vase under it.


Not this year.  When it came down it took part of the deck railing with it.


This year they’re doing a little better by not ignoring it.  Instead they’re saying “why that deck is your responsibility even if it is on the outside of the building and we’ll be happy to fix it for you for $35 an hour labor plus materials.”   A careful crew can turn this into eight hours of work and of course, the ten bucks worth of wood will be marked up a few dollars.  And they’ll have to buy matching stain.


Well, the management company has kicked it to the condo board and that’s kind of like an Obama appointment awaiting Senate approval.


This condo’s ruling junta probably will have to form a committee to hold hearings.  Bring people in to testify.  Drive to the place to take a look, though this late in spring, there’s no sign that anything like this was ever there.  Exploratory committees can’t be rushed.  This investigation requires care and precision.


Actually, it’s a pretty easy do-it-yourself fix.  Cut or pry out the damaged part, take it to Lowe’s or Home Depot where they’ll measure and cut it.


Hammer it back in.


But there’s a principle here.


Either the community is responsible for what happens out of doors or it isn’t.  The agreement we all signed for the right to semi-own these cardboard palaces says it is.


This is going to get fixed.  And I eagerly await the chance to tell you how it was done.  Hopefully before next winter when the seven foot icicle returns.


Anyone have a baby or a Ming vase I can borrow?


--The Congressional Budget office reports a Treasury surplus of $114 (B) billion for April.  Somehow, some liberal attack group must have hacked the CBO’s computer in an effort to discredit Republican deficit hawks who want to turn this country into a country store or family. There can be no other explanation for this preposterous figure.


--On the off chance the CBO figure is anything close to accurate, we have to figure out what to do with the extra money. We could invest it, but returns are just so-so these days.  But we cannot -- repeat, CANNOT -- give it away to all those moochers on welfare, on-hold road and bridge fixing leeches and other dregs of society that are too lazy or stupid to work.


--Oh, wait.  Here’s an idea: let’s find a new country to invade.  This is a good use for money and has worked wonderfully in the past.  And think of the number of heroes we can create and sentimentalize by shipping young men and women into the paths of enemy bullets and bombs.
I’m Wes Richards.  My opinions are my own but you’re welcome to them. ®
Please address comments to wesrichards@gmail.com
© WJR 2014