1391 The Handshake Seen Around the World

His name was George Shuba.  They called him “Shotgun” because he could scatter those hits all over the field. 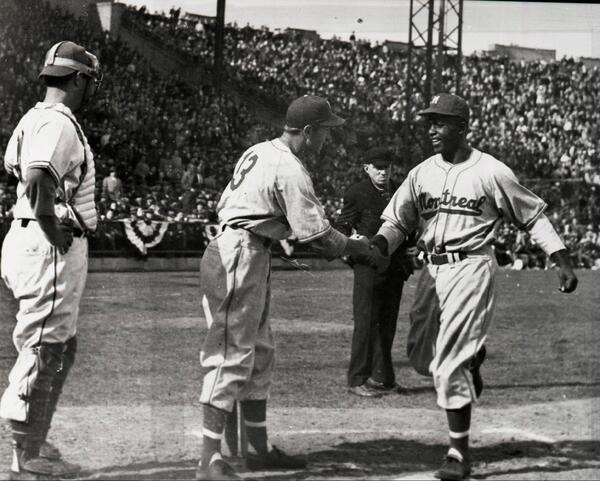 Associated Press
The guy on the right?  He’s Jackie Robinson.  It was 1946.  It was at Roosevelt Stadium where the Jersey City Giants hosted the Montreal Royals in the season opener.
The Royals were the Dodgers’ International League farm club.  And this was the day Robinson made his debut hitting a three run homer over the fence in the third inning.


Soon thereafter, Robinson was elevated to Brooklyn and you know the rest: he became the first black player in the majors.


Oh, but that handshake?  That was almost standard operating procedure in baseball back then. The runner crossed home plate, then went to shake the hand of the next batter up.  Except Robinson was, you know… black.


Shuba was the next batter up, but instead of waiting, he went out and offered his hand.  Robinson’s color meant nothing special to him. “I don’t care (about that,) he’s the best we’ve got.”


Shuba died this week.  89 years old.  Hair like salt, what there was left of it.  A few good seasons for the Dodgers under his belt.  Mostly as a backup.  But he was the last living Brooklyn Dodger who played in the final game of the one crummy World Series they won… 1955.


Robinson’s elevation to the majors came less than a year later.  You know there were few if any handshakes for him then.  But you know that.


Shuba was no civil rights crusader.  He was no social activist.  He was just a ball player from central Ohio; just an ordinary guy with a .259 batting average. Hit 24 home runs in seven seasons for Brooklyn.


(Robinson played eight seasons, had a .311 average, 137 home runs. Those numbers are bigger than they look.)


Late in life, Shuba said there was nothing special about “the handshake.”


Oh yes there was.


Somehow it seems better, somehow, when a guy half in the bag hits a 3 run homer in the bottom of the ninth to win than it does a guy who takes steroids, breaks records and goes forever into the books with an asterisk after his name.


Clearly, Robinson was a great player.  Clearly Shuba was not.


But remember, the worst guy in the majors, the very very worst is light years better than you or I will ever be.


As for Jackie Robinson?  Among all his many other accomplishments, he made Shotgun Shuba famous.


--Baseball rarely leads to fatal injuries.  Football is another story.  Reports say a high school junior from Wading River on New York’s Long Island has died from on-field injures… the third time that’s happened in that region this week.


--The bad news: Chase bank reports a cyber attack in which 76 million personal and seven million business accounts were raided for names and email addresses. The good news: no Social Security or account numbers were stolen.  They say.