He didn’t look all that big in the ring. 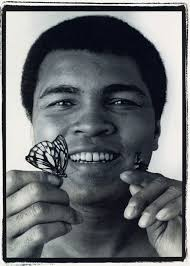 But when you stood next to him, even if you were a full size man and you knew he had only a few inches of height on you, you felt like you were in the shade of a great oak.

And when you shook hands his swallowed yours.

When he was in his mid 50s and already reeling from all of those punches in the ring, and could barely speak, you could only half understand what he was trying to say.  But you could tell that he was happy to hear a fan still calling him “Champ.”

Because that’s what he was.  Then, when he won. When he lost.  And now in death.

Muhammad Ali was bigger than the sport. Everybody says so. And they are right. There are lots of athletes “bigger than their sport.”  But Ali is the guy most everyone can agree about.

You can hate boxing and still love Ali.

You can read all about his childhood, his struggles, his problems with the draft, his conversion to Islam, his ups and downs, his Parkinson's.

There are ten thousand words about all those things for each of his millions of admirers.  If your head’s in the sand and you don’t know, ask the stranger sitting next to you on the bus or at your next company picnic before the Jim Beam kicks in.  They’ll tell you all you need to know and more. Much more.  Maybe too much more.

You want to know about his beliefs, his role as a role model, you can ask that same guy on the bus or at the picnic, and he’ll fill you in, chapter and verse.  Not here, though.

Here, you hear only about the 74 year old man whose name everyone knows because -- among many other things -- what he did for a living was legally beat up other guys for money and was cheered for it.  And he did it with the grace of Baryshnikov the strength of Paul Bunyan and the accuracy of a Cruise Missile.

Everyone knew death was coming.  Everyone knew when he was hospitalized a few days ago that the end was near.  So, no surprise.  But still a shock.

And when they propose putting his pretty face on a postage stamp, and they will…  and they take a public vote as they did for Elvis, vote for the young image, not the older one.  Because while his body was deteriorating, his spirit was still fully vibrant and intact --as the younger picture shows.

Whether you’re a butterfly or a bee, you can’t use rope-a-dope when the other guy in the ring is death.

Today’s Quote: “I am the greatest.” -- If you don’t know the source, check back with that Jim Beam guy at the picnic.