It was only in the high 80s in Caracas the other day. That’s low for this time of year when the temperature often rises above 100. 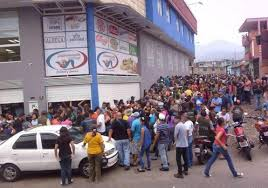 With the country’s dependence on slumping oil prices, luxuries like bread and toilet paper are scarce if available at all. It’s like the Soviet union in the post war
Photo: thegatewaypundit.com
years.  Bread lines. We hear stories about people eating cats and pigeons.  When they eat at all.


This is the story of Junior Perez, 25, one young man in a population of more than 30 million.  Word spread earlier in the week that there would be toothpaste available for the first time in awhile. Limit two tubes per customer.  So Junior got onto the line.  And waited.  And waited. And waited along with abuelas on portable lawn chairs and petroleous who had nowhere else to go because they don’t work much these days.


Along come a couple masked guys with guns and they notice Junior is using a cell phone.  Imagine, a cell phone and it appears to be working.  So they do what any masked guy with a gun would do, they command Junior to turn over the phone.


But Junior treasures his phone -- who there wouldn’t? He declines the command and starts running toward the pharmacy door.  The gunmen, being gunmen, fire.  And they hit Junior in the back and he goes down.


The gunmen have the phone.  And at this point you’d expect the line -- at least that part of it -- would kind of break up to help Junior or get out of the way.


Junior, on the ground along with most of his blood, dies.


The gunmen are going through Junior’s pockets to see what other treasures they can extract.
Still, no one moves.


These days a case like this is not unusual.  More than two dozen people including a toddler have been killed while on line in the last year, the AP says.


And it quotes a pharmacist who was waiting for his own ration of toothpaste thus:


“These days you put the line before everything… you get what you need and you don’t feel sorry for anyone.”


When baby needs shoes or Imodium, safety comes second even in a country with one of the world’s highest homicide rates.


Over in the Palacio de Miraflores, president Nicolas Maduro doesn’t know what to do. His mentor and predecessor Hugo Chavez left the country in economic ruin, appropriating factories and depending on oil for every nickel in the treasury.


Oh, one more thing:  Venezuela is paying its bondholders on time and in full when all it would have to do is default and use the money for toothpaste.


All investment carries risk.  And if you bought into Uncle Hugo’s delusional and unworkable scam, you don’t deserve to be rewarded for your bad choice.


Headlines:
-Obama makes pretty speech in Dallas, signifying nothing.
-Police chief gets standing ovation from crowd at Dallas Memorial, signifying something.
-Bernie endorses Hillary sending many of his supporters into anaphylactic shock.


Grapeshot:
-Shouldn’t something called “headlines” be placed at the head of a post and not near the end?