Yes, once again it’s time for Madison Avenue to show the latest stunning commercials about which you’ll remember everything except the name of the advertised product or service.


And it’s time to surround those commercials with the world’s longest hour, all 300 minutes of it.


It’s Super Bowl Sunday, glorification of the lowest of the low i.q. sports.  A choreographed street brawl with a lot of time- outs.  Big men running around a football field the size of a football field occasionally kicking and throwing a blimp-shaped bladder covered in pigskin but mostly just bashing the daylights -- such as there are of them -- out of each other.


And this year it’s in that great mecca of professional sports, Glendale, Arizona, a tiny city on the verge of bankruptcy and which fires municipal workers and raises taxes so it can attract major sporting events that it subsidizes.  This game is the World Series or World Cup of football.  But, mercifully, it lasts for only that 300 minute hour instead of dragging on for weeks.


Pro Football is different from college football. First, the athletes are better paid. Much better paid.  And not under the table.


With the pros, you can’t bring your own food into the stadium, something that’s tougher to do at college games than it used to be.


With the pros, injuries are better hidden but more severe.  Young college players are more resilient and recover faster than the creaky oldsters in the NFL.


And by the time a professional gets to the big time, he’s already pre-injured what passes for his brain, his knees and his hips to the point that additional scarring and swelling will settle in and feel right at home.


Superbowling is a fine way to keep undesirables off the street for a Sunday afternoon or evening. And it gives the rest of us a chance to travel at the speed limit.


--Glendale’s in big financial trouble.  But here’s an idea: bundle its bonds, get the rating agencies to give the bundles a top rating.  Then soak the suckers who want a piece of the inaction.


--Subprime auto loans are going the same way as the subprime mortgage finagling that caused most of the ‘08 depression.  Bundling. No credit, no problem!


-Question for the minimum wage earner who just bought a Lexus: do you think you actually can pay back that $40-thousand loan with an interest rate of 25%?


-Question for the loan sharks: How did you let the credit bundlers outmaneuver you on your own territory?


Personal Stuff: I note with profound sadness the passing of Carlo Greco, guitar builder extraordinaire.  Carlo was a friend of many decades, the creator of a marvelous classical guitar of which I am the proud owner and whose artistry and skill helped establish the original Guild instrument company as a major player.  He was a beloved and respected figure in the world of his craft, a friend to players and wannabe players and one of the great musical instrument artisans of the late 20th and early 21st century. 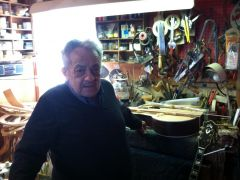 His name is Dan.   Names run in cycles. Maybe in fads. Time was, you could walk into a crowded room and yell “Hey Jennifer!” Half th...