Today, we’re going to help solve one of life’s great mysteries.  But before we do that, we have to introduce you to the anatomy of a bagpipe: 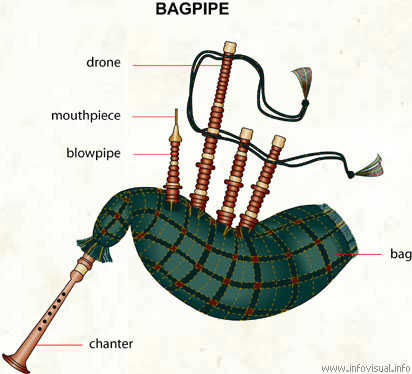 The piper blows into the blowpipe, filling the bag, then squeezes, forcing the air into the chanter and the four drone pipes each of which is able to produce only a single note.
The result is that unique bagpipe sound, a melody with accompaniment that sometimes blends and sometimes clashes with the tune.

There are times you can pick out a song and others when you can’t.

And these things are loud.

Here we have a model for what goes on in modern America. There may be a melody there somewhere but you can’t quite identify it.

Now let’s play with numbers.  Let’s say instead of one bagpipe and one piper, you have two of each. Ideally, they’ll be playing the same song.  But if they come from warring clans, they may try to outplay the other and what you get is a lot of noise.

The melodies are still there, but you can’t pick them out.

There are government pipers.  There are private pipers. There are poet and peasant pipers…  advertising pipers, political pipers, academic pipers. The field doesn’t matter and neither does the tune… if there is one.  They’re all doing the same thing: wrapping their message in so much noise you don’t fully understand it.

Why send a message that’s hard if not impossible to understand?  Easy.  They don’t want you to understand it, just take parts of it and invent the rest yourself.

Sometimes, this kind of message is ineffective. Here’s a likely example.  Pharmaceuticals.  You might be able to save yourself from the “heartbreak of psoriasis,” by swallowing or injecting such and such.  But you hear all those mandatory side effect announcements, possibilities of death  and other lesser maladaptations, and in 60 seconds of bad television, you’ll embrace your heartache.

But sometimes it’s VERY effective.  Guns.  By the time you finish with an ad that wants to sell you guns and ammo, you’ll be ready to think not that you can kill bad guys or hunt, but that the gummint is coming to take your freedom away.  There’s plenty of noise in the NRA spots.

Booze.  The chanter plays drink responsibly. But that’s not the message you hear.  The noise tells you “Get tanked.”

Someone ought to come up with a beer called “Responsibly.”  That way, there’d be a commercial for your drink in everyone else’s.  “Drink Responsibly!”

Politics.  Joe Average may be just your average guy, but he created 50- thousand jobs during his current term.  It’ll show people happily working.  You won’t be one of them.

Religion: try to hear what the preacher is preaching while the drone pipes are active.

So blow a Highland melody.  But try to filter out the drone and hear what they’re all really saying.

Hello ,
Am Mrs Cynthia corvin . Am a lady with a great testimony I live in USA and i am a happy woman today? and i told my self that any lender that rescue my family from our poor situation, i will refer any person that is looking for loan to him, he gave happiness to me and my family, i was in need of a loan of $360,000.00 to start my life all over as i am a mother with 2 kids I met this honest and GOD fearing man loan lender that help me with a loan of $360,000.0.Dollar, he is a GOD fearing man, if you are in need of loan and you will pay back the loan please contact him tell him that is Mrs cynthia corvin, that refer you to him. contact Mr.Zak,via email:- feroozsuptoo@outlook.com