Do you remember your last weeks on a job when you knew the company was folding?  Or when you knew you were going to be canned through a “downsizing” or “rightsizing” or some other short word that meant the bean counters won?


Do you remember the relief you felt even if you expected your finances to be a mess for awhile?


And what did you do during those last weeks?  There were only three ways to go:


Not that they’ve announced a closing.  They haven’t. But the once powerful voice of the New York working man and woman, now diminished to “oh, is that still around?” is showing what may be that delicious moment when they know their diagnosis is fatal, they’ve made peace with it and say what they think and if you don’t like it, stick it.


You can bowl in the News’ newsroom.  And the vacant desks belonged to some of the best, grittiest and most talented people in business of telling you what’s going on in the world.


As the headcount shrinks, the remaining heads are growing bigger and bolder by the day. 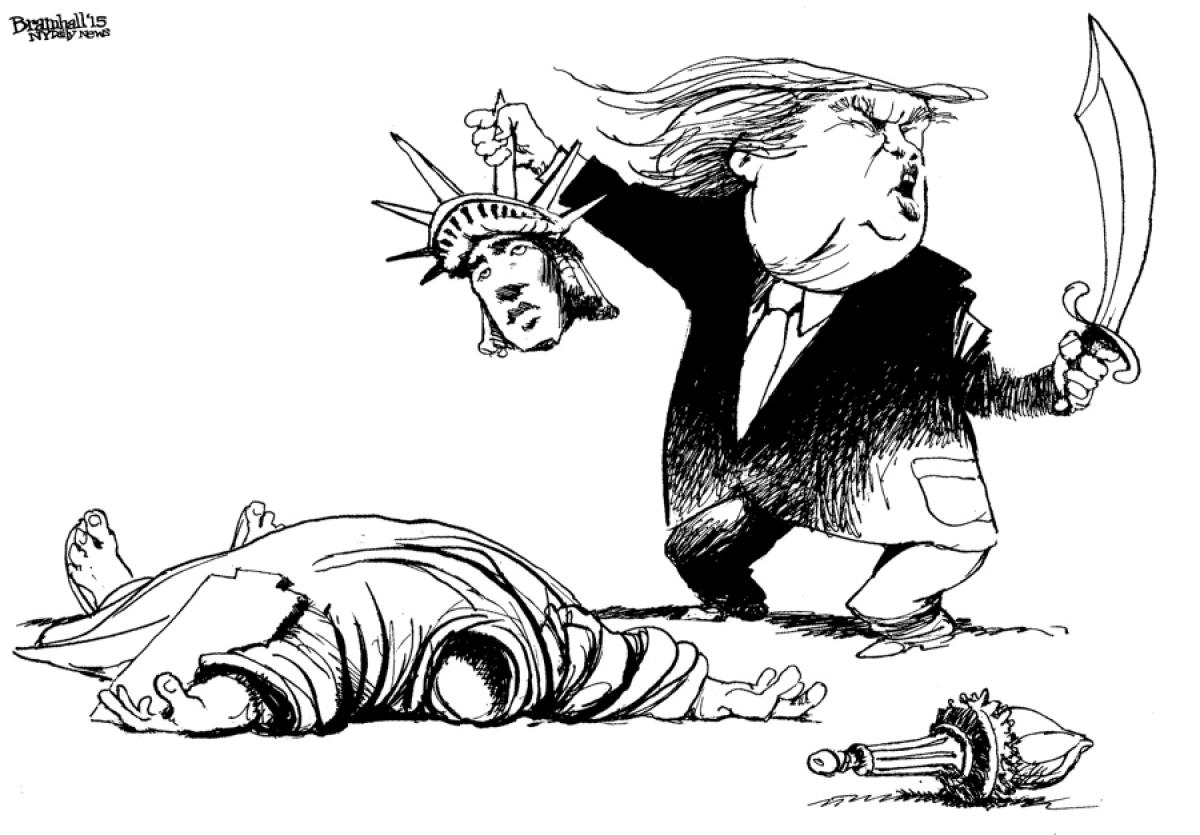 Bill Bramhall/NY Daily News 12/9/15
Need further evidence? Go to the “images” part of your web browser and search for “New York Daily News.”  There’s life in the old dog yet.


When founder Joseph Medill Patterson started the paper in 1919, he brought with him what we in the news business call a “style book.”


Most of these go on forever.  They deal with every detail of coverage and format and writing style.  Do we write “down size” or “down-size” or “downsize?” Look it up.  Do we use the title “Dr.” for someone who is a PhD, but not an MD, DO, dentist or veterinarian? Look it up.  Do we use well known initials for organizations like the FBI or NATO or NRA or IBM or spell out “Federal Bureau of Investigation?” Look it up.


Patterson’s stylebook for the Daily News contained only four words: “Tell it to Sweeney.”  What was unstated but understood was “write so the working guy without a lot of education can understand it.”


In the dark days of printed news, the Daily News has come out of the closet and tells is like it is.  But with a limp.


--The outcry over Trump’s proposed Muslim immigration ban has taken on tornadic volume and force with Republicans and Democrats alike condemning it as unconstitutional and un-American.  And everyone who’s anyone -- everyone -- says he’s finally gone too far and his poll numbers will crash, but they won’t.  If anything they’ll rise as he mouths what many Americans are thinking.


I’m Wes Richards. My opinions are my own but you’re welcome to them. ®
Please address comments to wesrichardsgmail.com