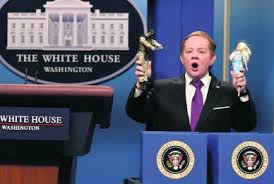 Wait, wait. That’s not Sean Spicer, that’s Melissa McCarthy on Saturday Night Live.  Well, so much for that career.  And here we were told Trump was going to create jobs.  Maybe the former press secretary was formered because SNL got better ratings than The Apprentice.

So that pathetic little Washington insider has been replaced by Sarah Huckabee Sanders or “SS” as she’s known in military history circles.

The big question is can she fill Spicy’s shoes?  Can she lie and twist the truth and try to tell us black is white and white is black as well as Sean?  Maybe she’ll get extra help, tutoring, from Kellyanne who probably could have taught even the Liar-in-Chief a thing or two.

First, he’s another of those Long Islanders Trump seems to embrace… Mike Cohen the lawyer… Sean Hannity… Sean Spicer… Bill O’Reilly and others.

The Mooch was a veteran of Goldman Sachs, then went on to build independent capital management outfits.  But the career highlight we don’t hear about that much these days is his fundraising for Barack Obama in 2008.
Say what?

By 2012 he had come to his senses and was finance co chairman for the Romney campaign.

And here you thought the president surrounded himself with loyalists.

In fact, questioning personal loyalty may have been what got Spicy in trouble.  After all, former GOP chairman and present White House chief of staff Reince Priebus brought him in.  And Priebus was suspect all along because he’s from New Jersey and was a Washington political pro. (Note to self: gotta remember “Reince” has an “ei” not an “ie” and “Priebus” has an “ie,” not an “ei.” Confusing.)

Technically, Spicer resigned.  And technically, the president offered him the chance to keep his job. But you can bet that during that last meeting between the two in the oval office, security was down the hall in the press office, packing Spicer’s chewing gum and demo-dolls in boxes to ship home.

Don’t feel sorry for him. He has a great career ahead of him. The world of public relations needs someone like this guy. And if he has trouble landing here, maybe Uncle Vladimir can find him something to do.

GRAPESHOT:
-Also “resigned this past week: the Minneapolis police chief who didn’t cut her Colorado hiking vacation short and come home after one of her cops shot a 911 caller dead.

I’m Wes Richards. My opinions are my own but you’re welcome to them. ®
Please address comments to wesrichards@gmail.com
All sponsored content and most pictures on this page are parody.
© WJR 2017
- July 24, 2017