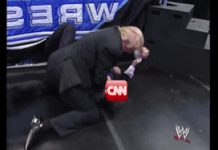 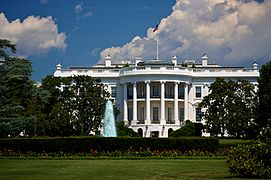 So the President of the United States posts a video of himself attacking CNN in a wrestling ring.  Brilliant.  And the Twitterverse is all a-twitter about a slapstick comedy bit from Wrestlemania in 2007 in which then- real estate developer and reality TV star Donald Trump attacks WWE Chairman Vince McMahon outside the ring.

Except now you don’t see McMahon’s face. It’s covered by a CNN logo.

And here’s the remake he recently posted.

The Very Serious among us are saying things like “Oh, he wants to show Putin he’s a tough guy,” or “He wants to do something symbolic to show his disdain for the media.”

But it’s neither of those things and it’s far scarier than a sitting president doing slapstick.

Back up a sec.  McMahon is a walking encyclopedia and implementer of successful marketing and promotion.  His goal is entirely legitimate: put on a show, sell a lot of expensive tickets, trinkets, bobbleheads, TV time, magazines and general excitement.  And he’s completely up front about it.

The target audience is boys aged 12-18 and their cheap beer daddies.  That’s a big chunk of the American population.  And his formula works and his audience is a renewable resource.
It’s also a template for the present White House.  Create drama.  Black hats and white hats, sometimes with reversing rolls.  Ad some nice looking, well dressed women, celebrity referees and throw in the obligatory metal folding chair or powder that looks like it blinds opponents when removed from its hiding place in the trunks and thrown in the other guy’s face.

This is not to demean the performers.  They are all fine athletes, acrobats and stuntmen or women. And fakery aside, you would not stand a chance against the weakest and least able of them in a bar fight.

But they are performers, playing to children of all ages, as Barnum said.

Clotheslining CNN when he should be working on the many problems the current clown show on Capitol Hill has created is not the job of the President of the United States.

SHRAPNEL:
--I was a cheap beer daddy. One of my offspring was a big fan of what was then called the WWF in the Hulk Hogan/Andre the Giant era. He outgrew it.

--I also was one of the preadolescents in a much earlier time.  You’d find me at Sunnyside Garden having saved up for a ticket to see guys like Johnny Valentine and Gorgeous George grapple.  I, too, outgrew it.