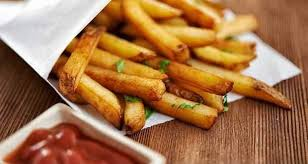 It’s the best ever.  Everyone’s working.  Everyone’s rolling in dough. Just ask our fearless leader. And while you’re at it get out your Psych 101 textbook, the one you still have even though you graduated in 1852, and look up what they say about people who don’t experience fear.

So, if the figures are rosy, how come there are so many people who can’t smell the roses?  Well… for one thing, you have physics professors and chiropodists working at Wendy’s.  They don’t do well there.  And they don’t last.  Sometimes they don’t do all that well at their chosen profession, either.  But people are less likely to complain about a bad course or teacher than they are about cold fries or an undercooked Dave’s Deluxe Double.

But Karma has raised its pretty head.  Those job creations, says the Associated Press, are mostly in areas where trump had fewer votes than Clinton.

Now, onto those Yoooj tax breaks. Biggest in history says President Fearless -- which they aren’t. You remember them, right? They were the ones that were supposed to fund new facilities, new employment and employee raises?  Another piece of fakery.

That money is going into stock buybacks.  Stock buybacks were illegal until the reign of St. Reagan. Why? Because the money enriched the corporate bottom line without adding actual value and enriched the larger stockholders while ignoring the workforce.  Good thing we had Ronnie.  Otherwise, you can’t imagine how much a 30-dollar-an-hour autoworker with a union card would be making today.

Buybacks make the remaining un-bought-back stocks more valuable per-share without changing the value of the underlying company.  And it’s not just the Engulf and Devour conglomerates that are doing this.  It’s also the touchy-feely companies like Apple and the Hippocratic Oath companies like Google.

And sometimes those buybacks backfire.  Here’s an example from a big publisher of local newspapers, the McClatchy Company.  They have a handful of good properties like the Miami Herald and the Kansas City Star.  But most of them are small and medium market losers. Their stock was on a downslide for years.  So they bought back a bunch of it.  A big bunch, which made their penny stock rise to about 10 dollars a share.

But it’s on the downslide again, and that makes the company worth little more on paper than before the buyback.

There’s Karma again. Except if you’re an executive who’s paid in stocks or options.  You… have a windfall, as long as you cash out before the bottom falls out.

SHRAPNEL:
--That walking cow chip Alex Jones has been kicked off most of the internet sites he used to spread his lies, hatred and conspiracy theories.  His followers responded with love mail and product purchases.
Jones is the guy who said the Newtown CT shootings were a hoax.

I’m Wes Richards. My opinions are my own but you’re welcome to them. ®
Please address comments to wesrichards@gmail.com
All sponsored content on this post is fake.
© WJR 2018