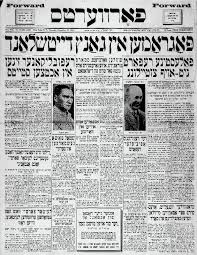 FORWARD FOLDS
These days it’s DOG BITES MAN kind of news when a newspaper goes out of business.  This one is a little different. The Jewish Forward newspaper has been printing for 121 years. Sometimes in spite of itself.

It started as a New York daily in Yiddish. It became the biggest of its kind. It started an English language version in 1990.  And it has been shrinking ever since.

That English language version has been getting most of the attention because there are only four Americans left who can read Yiddish.  But it’s not a big seller in English either.

First English editor was Seth Lipsky, a veteran of the Wall Street Journal and pretty conservative for a newspaper with a socialist reputation to uphold.  The latest in the top spot is Jane Eisner who is getting kicked out along with 20% of the staff, all of them credentialed veterans.  Here’s how she put it in an email:

I’ve been asked to step down as editor-in-chief, effective at the end of this month, and am evaluating what role I would like to have in the future with Forward management.

“Asked?”  Don’t let the door hit you in the tochus on the way out, Jane. “(W)hat role I would like to have in the future?” Put this shmata on your head and you know where the broom closet is, right?  You don’t? Why it’s your former office.”

So as it has in so many places, amateurs or unseasoned beginners will be running the Forward.com website.

The journalism side of the paper was usually solid. Big name writers going back 120 years.  Advocacy for all things Jewish, a little sketchy on the Israeli government.  The business side was like the caucus race at the Mad Hatter’s Tea Party.

They did things like sell their New York radio station for more than $78 million to support the printed word.  They sold their midtown building. Was this money squandered?  Well… there’s no way of telling. The figures aren’t public.  But like the circulation, the pile of money was shrinking.

Board members and their predecessors aren’t granting interviews.  Eisner will likely be penalized for sending her farewell email.  But the best guess is the paper lost about five million dollars a year in recent years.

As Eisner wrote in her email, l’hitroat.  That's "goodbye," but less final.

I’m Wes Richards.  My opinions are my own but you’re welcome to them. ®
Additional reporting by the Jewish Telegraphic Agency. Post title by Bill Crowley.
Comments: wesrichards@gmail.com
© WJR 2019