1765 Attack of the Killer Pollen 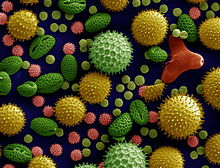 
You getting that tired rundown feeling?  You blaming Trump or overwork or lack of sleep or traffic jams or long lines at the checkout register?  Or your blood pressure meds, antidepressants, your idiot boss, your idiot spouse or your idiot children?


The allergy season has begun.  And with the spring-like winter we’re having in much of the country, you have lots of company.


Is there a way to differentiate between the “normal” tiredness of winter and the early onset of the sneezies?  No.  Not until you do something about any of those factors, eliminating one at a time.


But allergens -- pollen, dust, mold etc. -- conspire. Yes, we’re endorsing one of the least known but most realistic conspiracy theories ever.


These little grains, hardly big enough to see until they coat your car and windows in yellow are out there no matter what the pollen counters and pollen forecasters tell you.   A good wind gust and your breathing mechanism is disabled for 12 hours.  And usually that happens when it’s way too late in the day to take the non-drowsy pills and risk a sleepless night.


These mini terrorists can slip through a window that’s open only a crack.  And you feel silly wearing a construction mask around the house, let alone while you’re out walking the dog.


Winter often keeps much of the bug population from ever getting out of the egg stage.  This year, your little crawly friends will be an army that could conquer the entire country if it only could get organized and read maps.


If this goes on for more than one season, Old Man Winter is going to have the biggest fan club since Elvis or Sinatra in their primes.


But for now, he’s charged with pollenius assault.


Today’s Quote:
-“Of course not, dear.”  -- The only acceptable answer to your wife’s question “Does this outfit make me look fat?”


--Beauregard Sessions has recused himself from investigations of the Trump campaign.  That means there probably really isn’t anything to hide or maybe anything that is insufficiently hidden. Alas.
--The Washington Post, the newspaper that took down Nixon, and has won almost 50 Pulitzer Prizes, has a new earth shattering controversy in its crosshairs. It is the leading source for information on a story almost every other news outlet has missed. Wessays (™) takes a stand now, by saying Garfield the cartoon cat is male, not genderless, thus echoing the character’s creator, Jim Davis.


Grapeshot:
-First Lady Melania Trump read some Dr. Seuss books to kids at a hospital in New York, and at no time claimed she wrote them herself.