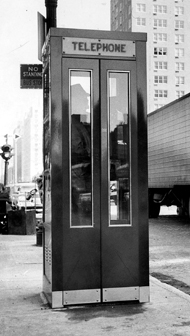 New York is trying to replace the former with free wi fi hotspots which will allow you to use your cell phone on the city’s dime and at higher speed than you can  buy from any commercial carrier.


--Seventy five percent of them will be out of order at any given time.
--Street noise won’t abate so you won’t be able to hear anything even though you’ll be not hearing it at the highest available speed.


--The hotspots will be a barrier against privacy that hasn’t been seen on the street since the demise of the old full size models you could use as temporary shelter in a storm.


But what of the token booths?  Subway tokens got the axe at the end of 2003, replaced by the MetroCard.  Token clerks then became card dealers.  But most people buy from vending machines only 63% of which are out of service at any given time.


Full size phone booths get scrapped or sold to collectors.  (Yes, there are people with collections of phone booths and many of them have stockpiled extra folding doors because … uh… well, you never know when you’re going to need a spare folding door.)


Token booths just get scrapped.  So 11,214 square miles of bullet resistant Lexan is sitting in stacks in a warehouse in Canarsie that started life as a synagogue, became a movie house, then a Korean church, then a Pentecostal church and finally a warehouse with glass enough to cover over both Los Angeles and Cuyahoga counties and extra to build more than two dozen transparent tree houses.
Where are the preservationists?  Or the recyclers.


Not once in all these years has anyone broken into the warehouse and stolen a square foot of this treasure. The spirit of enterprise is dead?  Lexan is too heavy to build a homeless shelter when there are so many available refrigerator boxes?


SHRAPNEL:
--The so-called President intimates that bomb threats against Jewish centers nationwide may be carried out by Jews trying to “make others look bad.”   Intimations like that use the kind of phrasing that says something without saying it.  Like, for example “some Washington bigshots have been more than parents to their adult children.”


--Steve Bannon, who combines the slithering of Karl Rove with the cartoonish pseudo- intellectualistic pomposity of Newt Gingrich, once had an internet radio program.  On it he interviewed now Attorney General Jeff Sessions.  Sessions told his listener that the WWII era law that prevented Jewish people fleeing Hitler from coming here was good for America.


TODAY’S QUOTE:
-“Pretty Ugly.”  Former president George W. Bush when asked to describe the climate in DC during the first month of the current administration.