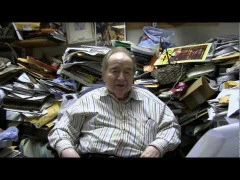 Don’t straighten up, I’ll never find anything.
Joe Franklin didn’t make it to his 91st birthday party yesterday, but we celebrated anyway.  A nice little gathering, though it’s gotten smaller for each of the last three years.


After all, when the birthday boy is upstairs cavorting with Marilyn Monroe, Walter Winchell, Jolson, C.B. DeMille, and anyone else who was anybody in times gone by why come back down to mingle with us?


Joe’s last assignment was with the radio program “Bloomberg on the Weekend,” which was carried in 18 time zones, many of which had few if any speakers of English.


So around this time of year the question always come in: “What was Joe really like?”  There’s a question anyone who ever heard his radio shows or watched his TV shows can answer as well as any of us who worked with him.  What you heard and saw is what you got.


Joe was the most unpretentious household name any household in America has heard or seen.


A small guy with a big heart.  Already old while still in his teens.  Limitless enthusiasm for the good bad and ugly of show biz.  Famous, infamous, people no one ever heard of but with something to offer.  Joe found them all.  Or they found him.


He said he interviewed hundreds of thousands of  people in his decades on the air.  True? Who knows.  It’s a high number in any case.


He’d come into the building and stash some free snacks in his attache case.  Too poor to buy them? Don’t be silly.  The first rule of performance is if someone offers free food or drink, take it.


We miss him still.

SHRAPNEL:
--HBO is going to make a mini series about the 2016 election.  They expect us to pay to see an event in which we’re still living?  Open auditions coming soon, with special consideration given to talking Cheetos, pumpkins and Alec Baldwin.


--The current political climate with its higher than ever lie count, the Trumpcare debacle, the Russia connection, the wire “tapp” and so on make us long for the good old days when the worst among us worried about kiddie car crises like the John Birch Society, the Dulles Brothers and missiles in Cuba. Today, we’re getting ready for a new affliction.  It’s called Pre Traumatic Stress Disorder.