1763 The Entropy of Competence 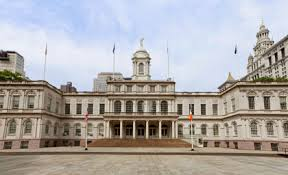 
Mayor Bill de Blastoff of New York is a well meaning guy who doesn’t know what the job of mayor is and proves it every day.  But New York is used to incompetence.  We had Giuliani, O’Dwyer, Jimmy Walker, Impeliteri and Beame.  Some were screwups. But some were crooked. And it looks like Blastoff may join that elite club.


Something about pay for play and stocking the swamp.  But we’ll leave that up to the US Attorney Preet Bharara, St. Preet to his followers, and the Royal Canadian Mountie to others. No, he’s not Canadian.  But like the Mounties he “always gets his man.”


Even without the crook possibility, this guy Bastoff has been in office since 2014 and has yet to find the light switch in the City Hall men’s room.


Before that, he was “Public Advocate” whose job is to hold news conferences about things he knows nothing of and complain.


In city government, everyone should be the “public advocate.”


You can forgive him for having his head in the clouds.  He’s almost 6 and a half feet tall. What you cannot forgive is not knowing where the lightswitch is.


Incompetence in office is spreading.  So without further picking on the poor mayor, let’s look at how this virus is spreading throughout the country.


In rural Pennsylvania a bloated and bumbling member of Congress has thus far refused to hold town meetings. He’s not alone in a district gerrymandered into something that’s shaped like psoriasis.


But in this case, his constituents held one without him.  If there was a spy in the meeting, he probably was there to write down license plate numbers, not to bring word to the boss about what his constituents were saying -- none of which was pretty.


In Tennessee, the legislature is considering a bill to rename the state’s Cordell Hull office building. Hull was Franklin Roosevelt’s Secretary of State and held that office for longer than anyone else. Roosevelt? That immediately makes him a “socialist” in one of the reddest of red states.  Oh, and he won the Nobel Peace Prize in 1945.


In New Jersey, Chris Christie has become a punchline ending in the word “bridge.”


And there’s nothing to say about the 45th President who can’t go a day without… Well, you know.  I’ll leave 135 of the next 140 spaces blank so you can paste in the latest tweet.


Be sure to eliminate the spaces, to bring it down to size.


SHRAPNEL:
--The deportation police are going after a lot of illegals with American children. Where do the children go?  It’s a tough decision… Crips or Bloods.


GRAPESHOT:
-When Bannon says Trump is a “good blunt instrument for our purposes” just what purposes does he mean?


TODAY’S QUOTE:
-“But ‘La La Land’ won the electoral college.” -- Retired CBS News Executive Producer Charlie Kaye after the presenters at the Oscars announced “La La” as winner of the best picture, when the real winner was “Moonlight.”