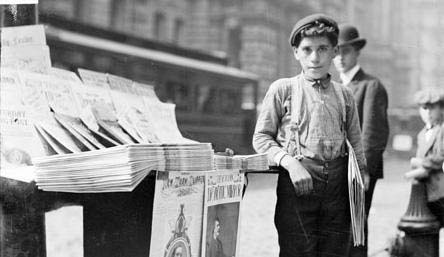 Someone bought Jimmy Brown a hat.

It’s a blue-grassy, gospel-ly song made popular about a million years ago by nonagenarian singer-songwriter Mac Wiseman who learned it from A.P. Carter.


In it, he tells the story of a poor kid from a small town selling newspapers on the corner, working to help keep his family together during hard times. One of those barefoot and hatless in the snow tales that has become part of the Norman Rockwell-esque America that never really existed.


Jimmy’s father “died a drunkard” and the kid is pitching in as kids sometimes did.  Jimmy’s not a reporter. He’s not an editor.  He just hawks the paper… out there in the snow.  With no shoes.  No hat.


But Jimmy knew something that today’s news boys and girls don’t.  News is a business.  And as with many businesses, it has its fair share of incompetents and scammers.


This makes life tough for the real news types.  It makes it tough on you, because whom do you trust?


And with the onslaught of “news” websites and television networks that have “expert” panels big enough to fill a football stadium, it’s harder than ever.


Further compounding the situation is the current regime’s war on the media.  So, what’s a reader/listener/viewer to do?


The quick and easy answer is go with the experienced hands.  Your local paper probably is more reliable than your local website because traditionally edited papers -- even mediocre ones -- are still mostly run by real journalists.


In radio and in print, the main question is “what’s the story?” In TV it’s “what’s the video.”  Not that video is unimportant.  But often, especially locally, they’ll build the story around whatever pictures they have and that often means telling the story only indirectly.


With national news… or news of a complex subject, the story is little changed. You may think the New York Times and Washington Post are liberal rags.  They aren’t. But even if they were, you can read them with a practiced eye.


There is no reason to watch cable gab fests unless you’re interested in hearing diverse opinions and never knowing whether they’re reality based.


The evening news is good from beginning to midpoint. After that it’s mostly puppies and kittens, “miracle” children and flying saucers.


There’s only one radio network newscast that’s consistently reliable: CBS.  Maybe you can add NPR if you can stay awake through all five minutes.


Websites individually and collectively a chaos stew.  The honest ones will admit to a viewpoint. Forbes, Fortune, the Washington Times, The Nation, Mother Jones and many others are upfront about where they stand.


The Huffington Post, Daily Beast, Yahoo News, Google News are all over the map, take questionable stories from questionable sources and skew in many directions at the same time.


I’m Wes Richards. My opinions are my own but you’re welcome to them. ®
Please address comments to wesrichards@gmail.com
All sponsored content on this page is fake.