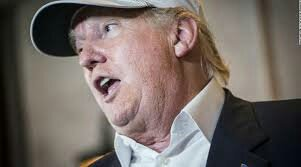 As Hurricane Donald continues with high wind and a heavy downpour of bad nominees, bad ideas and bad manners we consider three trains of thought.


At one time the scariest words in the life of any politician were “Mike Wallace on line two for you, Senator.”


When Helen Thomas hove to her feet at a Presidential news conference, she turned many a president into a garden slug who spoke in tongues.


And even though Nancy Grace succeeded Martha Stewart and Leona Helmsley and Shakespeare’s Katherina as the most obnoxious woman on small screen or stage, she knows how to shut an opponent up… and down.


No one today fills these vital roles.


II.
Who’s In Charge Here? (Or the Wayward Windbag)


Sometimes it’s hard to tell who runs the show.  Hurricane Donald thinks he does.  Nope.


General Dwight Eisenhower was elected President in 1952.  Before that he was president of Columbia University and before that was supreme allied commander in Europe during World War II. In other words he was the man who led the good guys to victory.


Five star generals and university presidents expect their orders to be carried out.


This leads us to Today’s Quote:


--“Poor Ike.  He’ll say do this and do that and nothing will happen.”  -- Outgoing President Harry Truman on what Eisenhower would find as President when he tries to command the federal bureaucracy.


And that’s what he found.


Nixon tried to defang the bureaucracy.  He failed.  Johnson tried to work around it. He failed.  And now thanks to dueling lawsuits and dueling federal courts, so has the presidential wayward wind.


Today’s cases of pushback are pretty high profile.  But the postal clerk who answers the phone has more immediate control of events than the White House.


III. To Tell the Truth (Goebbels is Green with Envy)
We have been conditioned like a bunch of lab rats to expect and ignore lies. This started eons ago as the war against the news industry showed the first of its hydra heads in the form of Joseph Goebbels, Hitler’s minister of propaganda and responsible for “the big lie.”  (Say something often enough and people eventually will believe it.)


The work was carried on by such other hydra heads as Confidential Magazine, the house organ of the John Birch Society and other great American literature.


Ultimately, it was the right wing talk shows that pushed mainstream America to hate and mistrust the press.


So now that we all expect lies… that’s what we get.

Grapeshot:
-I survived the Bowling Green massacre by not being there when it didn’t happen.