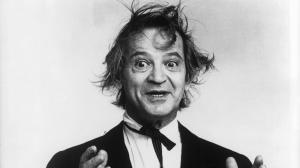 World’s Foremost Authority
“Your dad talks funny,” said The Teen to Margie Corey. What year was that again? Maybe 1954 or 55.  “He does,” she replied, “and he gets paid to do that.”


Professor Irwin Corey, “World’s Foremost Authority,” left us this week.  King of doubletalk and the half-liner, (one liners were too long, he said.)


“Without this great land of ours all of us would drown.”


He made a living by standing on a stage or on TV making jokes that we laughed at even when they were too complicated for our ordinary brains.


To Margie, he was “dad.” To The Teen he was just another grownup.  But the acquaintanceship that started in the early years continued until not so long ago.


They said he was born in 1914.  He said it might have been 1913, he wasn’t sure. So, 102 or maybe 103 years at the end.  A long life.  Hard to remember back 100 years or so, especially coming from the chaotic orphanage where he and his siblings spent their early years.


That was Brooklyn.  Then it was Great Neck. Then it was the east 30s in Manhattan. Sniffen Court. 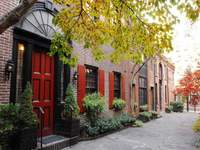 You’ve passed it a hundred times and never noticed it. A secret hideout in Murray Hill.


Margie died in 1997.  That piled on to Irwin like so much else about life. His gut churning beginning, the early death of one of his children may have been what turned him into the angriest man I ever met. And it was that anger at life, at injustice, at the plight of the American worker, the role of our country in world affairs that fueled his humor.  Anger is a great motivator and defense against the world’s miseries.


Cory was
-Blacklisted during the McCarthy years.
-A maker of buttons and member of the International Ladies Garment Workers Union. (Guy has to make a living.)
-A Civilian Conservation Corps boxing champion.


Eli Cohen he was in those days.  Irwin Corey came later.  What, Cohen was too Jewish?  He could have changed his name to Darcy van der Cliffe and still leave no doubt about where he came from; what he was.


At a backyard barbecue down the block in maybe 1982 or 83 he told me he was “feeling more than I do now than when I got here.”  He later repeated the line in interviews and on stage.


The professor and “World’s Foremost Authority” did not have a college degree.  And he was characteristically confusing about his high school year. Wait. Did he say “year” or years?


East 36th Street and its offshoot, Sniffen Court are quieter now than they have been in ages.  All you hear is traffic noise and footsteps, but not Irwin. Not anymore.


Someone wanted to bronze the wheeled walker he used in those last years.  But the Professor would probably want it go to “some old guy, someone maybe 85 or 90 who can’t afford a new one.”


And remember his words:  “The beauty is in the behind of the holder.”