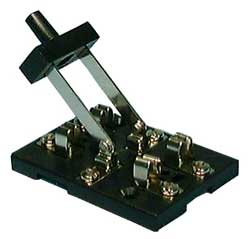 Turn on the lights by flipping up a switch. Turn them off using the same switch only flipping it down, right?

But in modern times, we are faced with a complication. Some stuff you have to turn off by turning on the ON switch.

Then, there are those lights that can be operated from more than one switch – like those that light a staircase, for example.

Turn on by flipping up a switch. Use the stairs, and once at the other end, turn off the light by flipping the second switch to “on.” So, now you have two switches in the on position, but the lights are off. In order to turn the lights back on, you have to flip the nearest switch to “off.” This turns on the light.
Somehow, these switches never go back to the original positions, which is that both of them are “off” and so is the light.

There’s no consistency in the locations of hot and cold water taps, either. This comes from the same general school of engineering. And it’s especially true of those single knob faucets where one device controls both the hot and cold water.

Do you turn it clockwise or counterclockwise for hot? Varies. Even varies among sinks and tubs in the same house. Most are unmarked (putting “C” and “H” on one of those elegant faucets would be so gauche. So, you burn or freeze as the faucet maker or installation plumber decides.

Many cell phones are turned on by pressing and holding the “off” button, which is a real button you can actually push.

Some ATM machines have similar quirks. For example, once you get onto the “withdrawal” screen, they want you to confirm whatever decision you’re making by pushing one of a column of buttons (real buttons, not “Start button” buttons.)

They have arrows leading from words toward the buttons. Invariably, the arrows fall between the location of the actual buttons and you have to figure out whether the machine means the button that’s higher than the arrow or the one that’s lower.

Equally invariable, you pick the wrong one and have to start over.

We are very lucky that these things haven’t become more popular.

Let’s say you’re tooling along the RFK Triboro Bridge, and come to the toll booth. The machine “reads” your “EZ Pass,” and the gate comes down, blocking your way. That wouldn’t work.

Suppose you turned on a stovetop burner and that extinguished the pilot light? THAT wouldn’t work too well, either.

How would you like a telephone that rang all the time except when someone was calling?
Or a blog that required a password to stop reading.


Coming Friday...  Irwin Corey a Kid’s Remembrance.  “Professor” Corey, officially 102 years old, but some say he lied about his age, died Monday.  We met as neighbors in 1952. I have stories.