1761 Conflicted Thoughts on Simon and Garfunkel 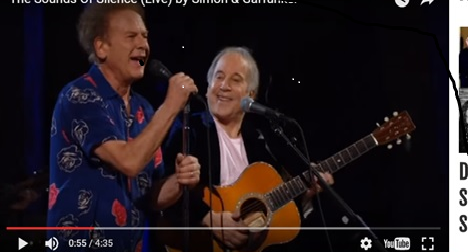 Paul... one 75ish year old Queens boy to another? I gotta hand it to you.  You made something out of nothing. Or maybe something great out of something small. Or maybe it was just that other guy who made half the sound.

After reading that endless new Paul Simon biography by Peter Ames Carlin (Henry Holt, 2016) you renewed and underscored my lifelong habit of never wanting to know much about an artist whose work I admire. Much of it, anyway.

It paints you as a nasty bully, a reputation you already had in the world of music, entertainment and broadcasting.  To know you is to diminish your work.

Your first big hit after years of doing mindless teeny bopper songs as Tom and Jerry (always with Art Garfunkel who is a mensch) “Sounds of Silence”... took decades to appreciate.  And that didn’t happen until that live recording recently out.

Why now?  A number of reasons. All but one of them are in the picture at the top of the page:  You are smiling at Artie. You are looking at him instead the usual off in space to your left.  The newly tweaked arrangement of “Sounds” is better than the 704 other versions you’ve recorded and the dreary big string versions and assorted covers by other artists.

Do you know how much work it was to cut that still photo from the video?  It passes so quickly you have to be a sharpshooter and surgeon to freeze and copy it. 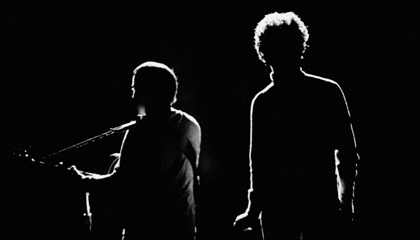 Maybe you’ve mellowed with age.  Maybe with all your fame and fortune you’ve emerged from that case of the shorts you’ve had all these years.

Your talent was always treetop. Not like the pollution- stunted maples of Forest Hills, but like the mighty oaks.

SHRAPNEL:
--Another reason to love football.  The Salt Lake Screaming Eagles of the Indoor Football League have created an app that lets spectators vote on the play. Next up: an app that directs the players before the play which means you the viewer can save lives by directing the team to the locker room.

--For-profit colleges were in President Obama’s crosshairs, as he fought to keep them honest -- maybe an impossible dream.  Now we have so-called Education Secretary Batguano  DeVoid and school stocks are climbing. Great… they can use all those government backed loans to trick even more kiddies into crushing lifetime debt for a degree that is a puff of smoke.

TODAY’S OTHER QUOTE:
-“...we’ll be talking to John Bolton in a different capacity.” -- President Trump explaining why he chose respected general H.R. McMaster as national security adviser over the scary former UN ambassador who might as well re-polish his resume because the quote translates into “hit the road, Jack.”

I’m Wes Richards. My opinions are my own but you’re welcome to them. ®
Please address comments to wesrichards@gmail.com
All sponsored content on this page is fake.
© WJR 2017
- February 22, 2017