4530 Capone Speaks from the Grave 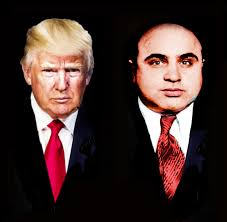 don and Al, brothers who never met.  That we know of.

Al Capone was the most famous gangster of the prohibition era.  He was a ruthless murdering crime boss whose downfall came from a small and insignificant breaking of the law.  If Al had had the inept Rudy Giuliani for a lawyer, he would never have been brought down by the likes of the Federal Prosecutors on the small charge. Eliot Ness got lucky.

But that was a different era.  They got “Al Brown” of the Bronx borough of New York on income tax evasion. He died after serving time, his syphilis did him in, not his criminal empire that had gripped Chicago and much of the rest of the nation.

And now, we have a different kind of gangster.  A con man, a deceiver of a magnitude Capone could never have conceived of and we’re treating him the same way we treated the anti-hero, Capone.

Throw stuff against the wall and see what sticks. Plenty. But the “cops” who “got him” are amateurs.  They have no idea how to bring down a Mobster-Mastermind, which precisely what trump is. (Neither did Giuliani, if you check his record as US Attorney.  Good thing he went into politics, because he had no future as a lawyer as his current client shows.)

Yes, the Democratic majority in the house of representatives impeached trump on two of a potential 11,356 possible counts.  And maybe there’s more to come.  Now, the totally nonpartisan United States Senate will deliberate his fate for ten seconds and declare him “not guilty.” After all, that phone call with the Ukraine president was … perfect.

And Chief Justice Roberts will have no choice to pronounce the President as such.  Delaying the start of the trial sounds delicious. Let that hang over his head for a while.

To be fair, trump is more John Gotti than Capone. He doesn’t observe the kind of silence and grit that Capone represented when questioned about his “associates,” as lawyers and prosecutors call his groupies and lackeys.

Did you watch any of that eight hour “debate” in the House on Wednesday? Screaming Republican kindergarteners vs. boring self-righteous Democratic know it all frat boys and girls.

New York Times columnist Gail Collins worries in print that the crazy president will get even crazier and do still more damage before he leaves office, which at some point he will have to.

But what about Capone? What would Al say to trump?  Impossible to tell for sure, of course.  But most likely it would be along the lines of “Cancel the twitter account.  Try to look more like a President.  Hit a bucket or two of golf balls on a driving range each morning. Don’t worry, pally, Americans have a collective short term memory problem. If they can resuscitate my image, they can resuscitate yours.”

I’m Wes Richards. My opinions are my own but you’re welcome to them. ®
Comments? Please send to wesrichards@gmail.com
© WJR 2019