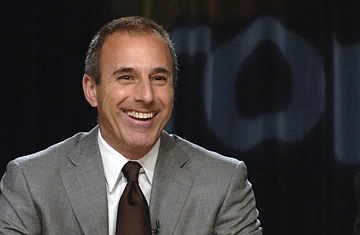 This is the guy I knew and worked with. Young, fresh, already balding. A decent newsman and a decent human being.  This was a gentleman, a class act.

As surely you know by now, Matt Lauer has been fired as host of the Today Show. Sexual misbehavior. Pictured as a tyrant. Where does an 800 pound gorilla sit?  Anywhere he wants to. Until they recognize that like King Kong, we don’t see who’s wearing the gorilla suit.

He was worth $25 million a year to the company. The people loved him. Early on, the staff loved him. Now?
What a mess.

Matt never needed to abuse. Women regularly signaled their availability.  So why pick on employees who performed acts thinking if they didn’t, their jobs -- and maybe their careers would immediately start circling the drain.

Matt, you were weakening over time.  Those interviews with trump and with Hillary Clinton were lame and uninformative.  Everyone has off days. You could have picked a Saturday or Sunday and napped in your living room instead of in a television studio with presidential candidates and millions of viewers.

It’s hard not to get bored when you do the same stuff over and over for 20 years.  When you’re bored, you start phoning it in. You have time and energy; you make trouble for yourself and others.

Lauer’s admission and apology was issued just before air time yesterday morning (but early enough to make a graphic for the Today Show open.)

NBC’s own statement was a weasel job. It said no one in present management heard about any sex thing until last Monday.  Earth to NBC’s current owner, Comcast: “present management” has been present for only a short time.
Okay, what about non-present management? Former executive producer Jeff Zucker said he never heard any complaints either.

And Jeff’s the kind of guy who makes it his business to know everything. Every. Thing. Everything from which reporters are stationed where to what words the anchors will say, to what time the office wastebaskets were most recently emptied to how the guy who empties them takes his coffee.

As we’ve pointed out in various other situations, when the real game is in the boardroom, the team on the field can’t win. While all this was going on, GE’s soon to be former CEO, Jeffrey Inept, was busily trying to palm off NBC and found a willing sucker in the guise of an avaricious and ignorant Comcast.  While the two sides were trying to out nickel and dime each other, the team on the field had a field day.

So you can’t completely blame Matt.  But, yes, you can blame him enough to throw him out because what he did was wrong and the climate is right for such firings.

In the shelter of indoor venues, various honors to various accused are being withdrawn.

Matt can only hope that Ohio State University doesn’t withdraw his honorary bachelor’s degree because he’s going to need it for those resumes he’s preparing to send out.

It’s bad enough that he hurt all those women. Now, the costume company is en route to repossess that gorilla suit.

SHRAPNEL:
--Hoda Kotb, co host of The Today Show’s frothy fourth hour, reminds us she is a credible co anchor and serious journalist by filling Lauer’s chair for now.  She does this in the simplest and most direct way. By calmly and reassuringly presenting the stories of the morning.

--Is Kotb a candidate for permanent occupant of that chair? A lot depends on what NBC can do about its scatterbrained hiring of Megyn Kelly.  A two- woman morning team would be a first, but would it work?

TODAY’S QUOTE:
“The star of the show is the show, not the star.” -- me, explaining what Lauer understood when he first started as co-anchor, an uncommon virtue he evidently has forgotten. (I hate it when writers quote themselves.)

I’m Wes Richards. My opinions are my own but you’re welcome to them. ®
Please address comments to wesrichards@gmail.com
All sponsored content on this page is parody.
Find more at https://twitter.com/@wessayswire