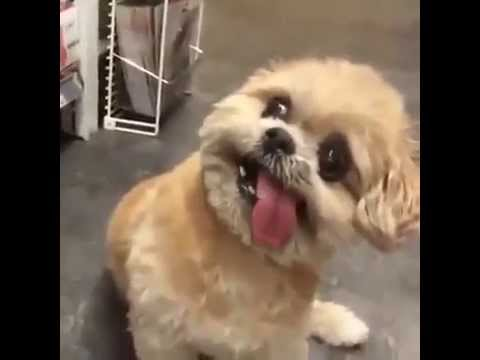 A veterinarian in Oregon prescribes pot for your pooch.  He is Brian Maas in Bend, a small riverfront city in where the marijuana laws drive Attorney General Sessions nuts.


Two types are available: one for pain, and one for anxiety. Many scientists both in and out of Oregon, (both high and not high,) recommend this treatment.


The jury is still out on whether it really works and whether there are the usual four million side effects that modern pharmaceuticals remind you of between scenes of smiling people in TV ads.


Now before you get all lathered up, Dr. Maas’ pot has been de-psychotrope-ized.  Not being an expert on such matters, the question that occurs to many people is “what’s left after they defang it?”


Generations of dog people have fed their pets booze.  The poodle down the street prefers Jim Beam to Johnny Walker, but will be happy to drink either. Very happy.  She also seems to prefer Budweiser over Miller, but that’s probably because “Bud” has only one syllable and is therefore easier to bark.


The docs who use this form of treatment say it’s less debilitating than the usual dog and cat tranquilizers. And there’s no argument here about relieving the pain of a suffering animal or the anxiety of a dog or cat that refuses to get into carrier or car because it means a trip to the vet’s and probably an injection of some kind.


Note: the dogs don’t smoke.  The pot is put in oils or other stuff they eat or lick.  If the dogs DID smoke, you can bet that the Surgeon General would be all over the canine bong and joint crowd.  There’d be warning labels on the packages.  The animal’s health insurance cost would skyrocket and you’d likely see public service announcements featuring Nancy Reagan with her oh-so-sound advice, “Just say Woof.”


The feds are getting in the way of clinical testing.  And where are all the states’ rights advocates? Probably out cooking their meth while Rover’s arthritis is getting worse and South Dogpatch won’t allow a treadmill run to determine whether the dog is arthritic enough to be considered for pot.


Any kid from middle school age on up knows how to and where to buy a joint and how much he should pay. But a mature dog or cat with the aches and pains that sometimes come with age is shut out.


Next thing you know, the ATF will be raiding Dr. Flickenheimer’s Kennel and seizing the brownies for evidence.


SHRAPNEL (Animal farm edition):
--An overweight squirrel in Maplewood NJ has been caught in the act of stealing chocolates, lip balm and tissues a homeowner traditionally leaves outside for delivery people at holiday time. Breaking into a bag for candy and throat lozenges is one thing.  But lip balm?


--Alas, poor Alice Hoyle of Bath, England. Someone stole her cow.  Well, not exactly a cow.  An inflatable cow she uses as a lawn decoration to promote a charity that helps real cows.


I’m Wes Richards. My opinions are my own but you’re welcome to them. ®
Please address comments to wesrichards@gmail.com
All sponsored content on this page is parody.
Find more at https://twitter.com/@wessayswire
© WJR 2017