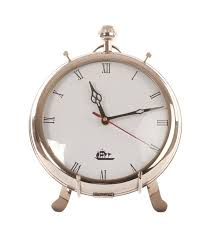 It's just a plain ole’ desk clock with a silver colored plastic body, a bright face, big numbers you can read from across the room and a cheap quartz movement.  Lately, it's been behaving oddly.
Some days it loses five minutes.  Some days it gains back the time, or some of it then loses it again. Quartz clocks generally gain time when the battery is low.  That's counterintuitive, but it's true.

This calls for an investigation.  Ask Google. Ask Quora. Ask Siri, Alexa, Cortana.  Dear Abby. No one has an answer, though surely one exists.

Several battery changes later, the clock is doing the same routine. So the only possible explanation is it’s haunted. And why would some ghost park itself in a cheap quartz movement?

Why it’s sending a message, of course. But what message, and why this clock? Is that grandpa sending word about something that happened in 1912? Is it some random dead guy in Nepal sending a test message just because he can? Or he needed a practice session?

So what’s in order here is a seance.  We were seated around the table and successfully contacted Leroy Anderson.  He yelled at us: “I only know about syncopated clocks!  What’s quartz?”

Next on our list was Henry Work.  Another success.  But he stormed “All I know about is My Grandfather’s clock.”  This was getting us nowhere.

Before we ended the seance some ghost showed up claiming to be Seth Thomas.  He berated us, too by stomping his ghostly foot and telling us “S*it like this doesn’t happen with a REAL clock. Quartz is for the birds. Gears! Springs! TICK TOCK!”

Since Mr. Thomas died in 1859, we just wrote him off as a cranky old man time passed by.

The quartz clock was invented in 1927 (not a typo) by two scientists at Bell Labs.  We investigated their adventures and all that resulted was confirmation that human wrecking ball Carly Fiorina destroyed what was left of it after the breakup of the original AT&T.

SHRAPNEL:
--The owners of Dollar Tree and Dollar General say they plan to start selling alcoholic drinks in 1000 of their stores.  What kind of shot bottle will you get for a buck?  Maybe ten-minute old Scotch or bourbon, and rice wine.

--If ever you considered not having medical insurance, consider this. The hospital bill for a recent hernia operation was close to $30,000. And neither the surgeon nor the anesthesiologist has billed yet.

--The anesthesiologist was a nice-looking young woman.  At least I think she was nice looking. But I don’t remember a thing after putting on the mask.

GRAPESHOT:
-Do not believe the myth that a good surgeon can tie a knot with one hand, though the surgeon in this surgery was a guy who everyone --everyone -- including your correspondent likes and respects.

-Mark “Mark the knife” Armstrong, you are a prince among men and I will adore you at least until your bill arrives.