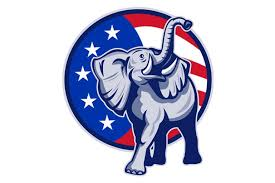 Yes, Republicans are members of a third party, or perhaps a third major set of voters.  Latest figures show 31% of America identifies Democratic, 24% identify as Republican and 42% are independent.  That makes the GOP a third party even though the independents are not evenly split between the parties they lean toward (most are Dems, though.)

So for a minority party, the Republicans are doing pretty well. After all it’s been a long time since a third or fourth party candidate won a presidential election.

Well, at least on paper, Americans are good about minorities.  So at the moment, the minority party controls the White House, the Senate and the Supreme Court.  It also controls most of the state legislatures.

In fact, the idea that the “majority rules” is just part of our mythology.  What rules is money, influence and loudness.  But the money types are starting to see they’re backing a bad horse in the upcoming election.

Wal-mart knows more about the average American than any government agency with the possible exception of the NSA.  Evidence?   Well… they raised employee wages, increased corporate giving and cut back on ammunition sales.

Big deal?  Yes. They know which way the wind is blowing.  It’s a small wind at the moment, but it’s wind, nonetheless.

When it comes to impeachment and trial, forget about Schiff and Pelosi, forget about Moscow Mitch. There are two guys who can get rid of this poison snake: Rupert Murdoch and Charles Koch.

If the former turned Fox News against the president and the latter yanked funding from his think tanks… problem solved.

I’m Wes Richards. My opinions are my own but you’re welcome to them. ®
Comments to wesrichards@gmail.com
© WJR 2019