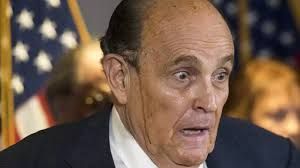 There’s something ironically delicious about the Justice Departments raiding Rudolph Giuliani’s home and office at dawn the other day.  After all, he began his public career as a US Attorney, albeit one with a mile-high pile of overturned convictions.

He went on to become Mayor of the City of New York, an office he could not have won again until 9/11 when his 23rd floor bunker was destroyed and he looked for the moment like a decent leader.

Since then, he has reverted to form, becoming a high-profile ambulance chaser and twister of words and concepts as too many others in his “profession” are.

The raiders on Rudy strongholds on two of the city’s snazziest streets, took out boxes of documents, computers, cell phones in various conditions including dead and who knows what-all else.

Will any of this draw formal charges?  We’ll find out eventually. But even if they don’t, the damage has been done.

He has shot himself in the foot so often and so well, it’s a wonder he can still walk… if he can.  No one has seen him taking a step recently.  And some of the steps he took when we knew he could still walk were really missteps.

They include but are not limited to

--Letting one of his wives know she was fired by informing her of his girlfriend during a public event.

--Trying to dig up dirt by traveling to Ukraine.

--Conducting private business on the government’s dime during his non-digging breaks while in Ukraine.

--Representing donald trump at the impeachment.

--Fighting crime by arresting window breakers and turnstile jumpers while...

--Sloppily prosecuting mobsters who later grinned their way to freedom on appeal.

So just what are investigators investigating?  Giuliani’s lawyer, Robert Costello says among other things they’re looking into “alleged” failure to register as a foreign agent.

That law has been around since the Nazi/World War II era.  It hasn’t been enforced a lot in recent years.  But it says clearly that if you are going to lobby for a foreign power in this country, you have to register.

Registration probably isn’t all that tough.  You have to fill out a form and wait.  These are things that don’t come easily to -- um -- certain people.  There are prescribed punishments for violations. They include fines that most of us would have trouble scraping up.  Those same certain people don’t have that problem. Convicts also can do serious jail time.  Rudy may think that orange is not “his color.” And we all look fatter in horizontal stripes.

So, in his discussions with officials in Ukraine, did Rudy violate the law?  Or was it all on the up-and-up?  The US didn’t have a bug in the table lamp.  The Ukrainian Prosecutor General may have.  If there’s tape, obtaining it will require some diplomacy -- probably something like buying tanks and short-range missiles.  Our diplomats often deny doing anything like that.

Note to America’s Mayor:  If you have to do time -- unlikely as you think that may be, be thankful it’s here and not where you get borscht and Jell-O three times a day. Oh, and Rudy, thanks for the little reaction rant. Yeah, sure we’re jealous of your fame and fortune.