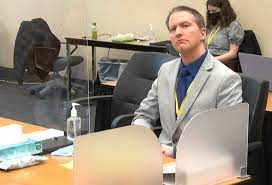 Murderer Derek Chauvin sat in court all those dreary days of his trial looking like the cop who pulls over a ditzy disconnected drunk driver, his face an arrogant combination of sneer and smirk looking for all the world like the guy who a jury just can’t wait to convict of… something; anything.  Deliberations took little more than a day in the jury room in Minneapolis.

But George Floyd is still dead, killed while cuffed, on the hard ground with Chauvin’s knee on his neck for nine minutes and 29 seconds. The verdict was a verdict – that’s all – not a resurrection.

Minneapolis was tense before the verdict came in late on Tuesday afternoon. National Guard, police and other lawmen and women were ready for trouble, which surely would have come had Chauvin been declared not guilty.

One bad cop taken out of circulation. Others in the case awaiting their fates. These crimes are supposed to be decided on the evidence alone. They rarely are. They weren’t this time.

Outside Minneapolis – and maybe inside – how many similar cases are waiting to happen for the next white Chauvin and the next Black Floyd?

And yes… it can happen to anyone of any race.  And it will.