Talk about longevity.  Mrs. Malaprop has been with us since playwright Richard Brinsley Sheridan introduced her in “The Rivals” in 1775. 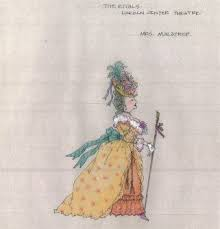 She’s the lady who got words mixed up.  Weapons of mass production… the patient received a blood transmission… walking a torturous path.

Mrs. Mal’s new husband is Mr. Euphemism.  (When they met, she called him Mr. Eupheminist.) Yes, in 241 years she’s learned to choose the right word at least sometimes.  And now she’s working on getting all of us to join her in deluding the language.  Oh. Wait. Diluting.

“Eek, a mouse!” Has turned from frightened to post traumatic stress disorder.

But since the marriage, euphemizing has spread like butler.  Uh… butter.

We have no more mechanics.  But we have lots of automotive technicians.  We have no plumbers or furnace repairmen.  We have plenty of Heating, Ventilation and Air Conditioning contractors: HVAC consultants.

We don’t have problems, we have issues and challenges.  A kid who flunks third grade gets moved ahead to fourth anyway and we call it a “social promotion.”

Beauticians and beauty operators are now “stylists.” The woman who sells you a lipstick is now a cosmetologist.

Movies used to have producers. Now they have executive producers.  And some have more than one, which is a violation of the law of physics that says no two objects can occupy the same space at the same time.  (We used to call it the Pauli Exclusion. But why use two words when you can use 12?)

Sometimes we use dilutions in different ways. Example:  At a newspaper, the Executive Editor outranks the Managing Editor.  At magazines, it’s the other way around.  These titles are dilutions of the terms “Editor” and “deputy editor” or “assistant editor.”

Dictionaries don’t help.  Where once they were prescriptive, they’re now descriptive.  That means if enough people use a word wrong, it becomes right. It says so right there in the dictionary.

So by now you may be asking whether the former Mrs. Malaprop was divorced or widowed.  The latter is correct.  But that first marriage lasted so long she retains some of its characteristics. No. Wait. Instead, she hasn’t fully shape shifted.

If she does, you can say she found a new paradigm.

Ah, for the simple life. Or the life that eschewed the convex.  Uh… the comPLEX.

Remember… when Yogi malapropped, he did it on porpoise.

Today’s Quote:
“Uber.” -- Barack Obama asked what his next job will be.

Shrapnel:
--All of a sudden and at long last the rural/urban divide has become a topic of interest.  Too bad it didn’t happen sooner.  The vast ongoing explosion of suburban influence is changing the equation and no one knows exactly how or by how much, but it’s a move to the right, not the left.