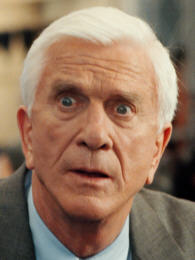 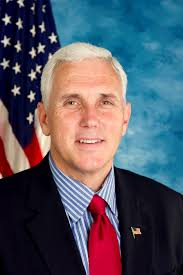 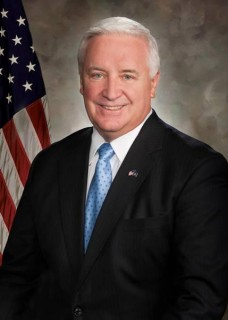 These three guys have one thing in common.  They’re Funny.  But only one does it on purpose.  On the left, there’s Leslie Nielsen who started as a movie bad guy and then turned out comedy hit after comedy hit.

On the right is former governor Tom Corbett of Pennsylvania.  His four years in office were a running joke.

And in the center ring is Mike Pence, the governor of Indiana and the biggest joke of all.  Oh.  And you elected him vice president.

Well, wait a minute. Maybe you didn’t because more people voted against than for him.  But the people you elected to take the vote that will elect him will elect him in your name.

Anti abortion, anti birth control, anti- gay marriage.  He’s the guy who made sure businesses in Indiana could discriminate against gays.  He blabs a lot about being “Christian,” but WWJS?  He was one of the first in the door for the tea party where he now plays the Mad Hatter.  He’s in the bag for the Koch brothers. And as we found out the other day, he’s an avid theater goer where the audience booed him and the cast cast aspersions.

Not worried?  You say we’ve had a lot of comedic vice presidents?  Well you’re right about that.  Think about some of our recent veeps.  Internet inventor Al Gore. Nattering Nabob Spiro Agnew. Art lover Nelson Rockefeller. Mr. Potatoe head Dan Quayle.  George HW Read-My-Lips Bush. Richard Checkers Nixon. Dove of Peace Lyndon Johnson. Joe (Stand Up, Chuck and let everybody see you) Biden. Dick (If I only had a heart) Cheney.
And if you want to go a little further back, Schuyler Colfax also of Indiana doesn’t get nearly the credit he should for great standup.

Who remembers anything Leslie Nielsen said after “doing nothing is very hard to do. You never know when you’re finished.”

And who remembers anything Tom Corbett said about anything?

And yet white hair power lives.  It’s not as funny as orange hair.  It’s a lot more common. But still…

What’s truly funny about Mike Pence is that he’s the guy the republican establishment wants as president. If Trump had lost the election -- the real election -- both he and Pence would be a footnote.

But Trump will likely be a one-term president.  And then, like Hillary Clinton, it will be Pence’s turn.  Why do the old-school Republicans like him?  Because he can be bought.  And Amazon.com probably will run a special.  (Your one-click order has been placed.)

Jefferson Davis is laughing in his grave.

Grapeshot:
-Remembering Milt Okun who brought us acts like John Denver, Peter Paul and Mary and countless others and who died this weekend at age 92.

-Your tax dollars at work: Each November, New York City revises its budget and this year an overall increase of more than $1 billion includes more than $6 million for outside lawyers to work on the various play for pay investigations swaddling Mayor de Blastoff and his cronies.