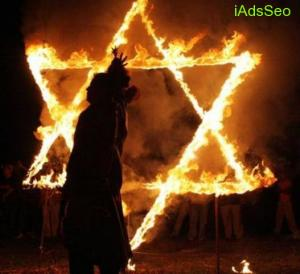 Okay, what do you think you’re seeing?  Why it’s a Star of David.  And it’s burning.  But wait… is this fake news?  Did someone really put up a six point star on the lawn of a Jewish owned home and burn it?

Not yet… at least that we know of.  This star is burning at a recreated ancient rite in Mexico.  Supposedly, it’s to ward off evil spirits.

So, then, are you more comfortable with this: 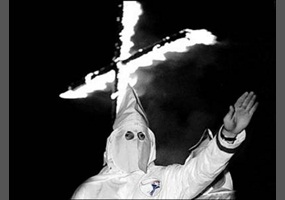 Ah, yes, that great white supremacist gift to African Americans and others with dark skin and or religions other than their brand of Christianity, The KKK’s infamous burning cross.

One of the reasons they burn crosses is that even an idiot klansman can put one together.  Two pieces of wood and a nail or two, a gallon jug of moonshine where gasoline isn’t available, a Bic or Zippo or box of wooden kitchen matches and voila!  Instant hatred at a bargain price (especially if you siphon the gas from some black guy’s ride and shoplift the Zippo.)

A six pointed star is a relatively complicated structure.  It’s often beyond the skills of builders who can’t count above two.

But there’s a scholarly branch of this organization.  They put on their Sunday best and visit classrooms where toddlers are learning how to make stars from  popsicle sticks or tongue depressors and Elmer’s Glue. 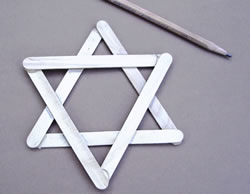 At some point they’ll figure out that it’s simply two triangles, one of them upside down.

So expect more and more people to wear their hate on their sleeve.  In the oncoming era bad people who’ve been hiding in their rats’ nests will surely pop out and go public.

Even now, Klan jewelers are hard at work on star pendants with 18k gold simulated flames.  That’s killing two birds with one stone. The gold looks like fire, and it’s worth a few bucks in case they need to make bail.

Call us paranoid, but remember even paranoids have real enemies.

Shrapnel:
--A woman of our acquaintance from Kansas long ago used to defend the charitable work of the KKK where she gave piano lessons to poor kids.  Now, the sheet-heads are claiming they’re not white supremacists.  Both take the “plausible” out of “plausible deniability.”

--It’s hard for this space to say anything sympathetic about Mitt Romney, but you have to feel sorry for the guy these days.  After all, the transition team of teasers roped him into believing he had a good chance to become Secretary of State.  No official decision has been announced yet, but when it is, it ain’t going to be Mitt.

--The president- elect’s reason for writing off charges Russia hacked the election?  No weapons of mass destruction in Iraq. If the CIA was wrong then, it has to be wrong now, too… right?

Grapeshot:
-Remembering Ed Koch on what would be his 92nd birthday.