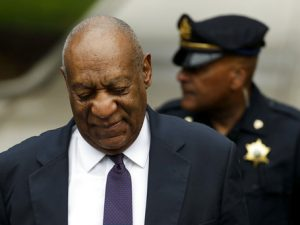 The 21st Century is relatively young and the contestants are lining up for the championship.  Unless the president is impeached, then tried in the Senate, the leading contender for trial of the century right now is Bill Cosby’s.

This won’t be as big as OJ.  There are no cameras in the courtroom. So our eyes have to be the courtroom sketch artists.

What happens to those drawings when the trials end? Is there a secret art museum somewhere where we can go to see them?  Are there SoHo galleries that specialize in courtroom art?

In any event, in the Cosby case there probably won’t be an OJ style “dream team.” Robert Shapiro is too busy with LegalZoom and isn’t doing criminal trial work anymore.  Dershewitz probably doesn’t need the money.  Johnny Cochran isn’t around anymore.

Court TV has been turned into a garbage rerun channel.  HLN’s trial stars Nancy Grace, Jane Velez-Mitchell and Dr. Drew have been put out to pasture.

Plus this trial is taking place in a suburb of Philadelphia, not Atlanta.  So the weather will be better than Phoenix (Jodi Arias,) Orlando (Casey Anthony) or Boulder (JonBenet Ramsey) but not good.

It’s hard to think of the once-beloved Cosby, now a doddering overweight and unattractive old man as a sexual predator. And even pictures from his younger days don’t bring to mind a pill peddling stud.

After his long absence from the public eye, Cosby decided he’d become an arbiter of taste and standards for American young people of color.  And he got up and said a lot of stuff, much of it helpful. Pull up your pants. Speak English.  That kind of thing.

He should have listened to himself, extracted the basic ideas and applied them to his own life.

Here’s what someone should have told him before all this stuff with the various women happened.

Listen, Bill, philandering is not widely accepted as normal behavior even though it seems like many are doing it.  But if you’re going to do it, do it honestly.  Men can find women and women can find men who want to cheat. It’s not all that tough.

If you restrict yourself to the eager… or at least to the willing, you’ll hurt no one but your spouse, and it doesn’t look like you care much about that.  You won’t have to fool anyone into believing you have their best interest at heart and you won’t have to imply that you’ll make them TV stars.

That takes away the thrill of the hunt.  But in the long run, it’s a better means to your end.

Think of the misery you and others could have avoided.  And the public scorn you’re going to endure for the rest of your days no matter the outcome of this trial.

And remember the words of a fairly famous and still well regarded man who came from the same state you do in...

TODAY’S QUOTE:
-“Better to make an old girl happy than a young one miserable.” -- Benjamin Franklin

I’m Wes Richards. My opinions are my own but you’re welcome to them. ®
Please address comments to wesrichards@gmail.com
All sponsored content on this page is parody.
© WJR 2017