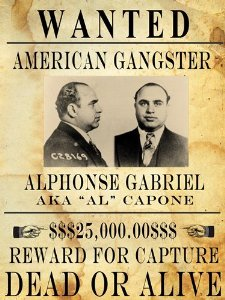 Eat your heart out, Geraldo! You may have become a national embarrassment when you dug up and opened Al Capone’s vault on national television and found … nothing.  But Al DID leave some stuff behind, and it has new owners.

They had an auction of his stuff in Boston they other day.  Someone walked away with Capone’s pocket watch for about 80 grand.  Talk about a holdup!

Someone walked away with an original song he wrote while a resident of Alcatraz.

Capone probably is the best remembered gangster in the history of the American underworld. The song sold for about 16- thousand.  Here are some of the words as quoted by the Associated Press:

"You thrill and fill this heart of mine, with gladness like a soothing symphony, over the air, you gently float, and in my soul, you strike a note."

Al, babes, don’t give up your day job.

The auction wasn’t restricted to Capone-abilia.  There was a letter from Bonnie Parker of Bonnie and Clyde infame.

But in a terrible act of disrespect, one we cannot leave unmentioned, a letter from Ozone Park, Queens plumbing supply salesman John Gotti didn’t sell. For all the publicity Gotti got, you’d think someone would have wanted it.  It’s probably too recent.

And we like them even more if they’re fictional. Vito Corleone,  Tony Soprano and Wo Fat to name a few or the better knowns.

They’re not only better at their jobs than the real thing, they’re safer to admire.  None of them will put the head of a dead horse in your bed.  None of them will come knocking on your door asking you to “wet my beak.”  None of them will lend you a dime or collect the time you borrowed last week, the bill for which has risen by 280%.  Oh, wait. That’s your department store credit card.  You loan shark payment is only 187%.)

You have to wonder why as a culture we’re fascinated by these outlaws, real or imagined.   Maybe it’s because there’s almost always admiration of someone who breaks the rules and gets away with it.  And that’s what these men and women do, at least for awhile.

They appeal to something that seems common in the American DNA, an anti-authoritarian rebellion, a sense of stand your ground.  Elsewhere, you find less of that.  That we don’t simply follow orders is an appealing idea.  We pay lip service to the boss or to the parent or to the teacher’s way of doing something and then find workarounds. Comes from the same root.

That often serves us well.  But it often doesn’t. Acting on this idea we elect crazy people to high public office and then wonder if they are high.  We buy junk we don’t need because we’re told it’s good stuff and then anger when it doesn’t work right.  And we rarely win that fight against City Hall.

Capone was responsible for the deaths of who-knows-how-many people, and he’s a folk hero to some.  But there are limits.  You might say the same about Lyndon Johnson or Dick Cheney. No one’s going to buy a pocket watch or duck rifle at auction.

Willie Sutton was a colorful bank robber and a folk hero.  Bernie Madoff outdid Sutton by an immeasurable figure but no one’s lining up for dibs on any love song he may write from his cell.

Yes, there are limits.

TODAY’S QUOTE:
-“Capitalism is the legitimate racket of the ruling class.” -- Al Capone.