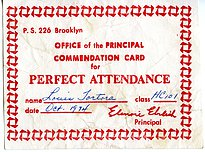 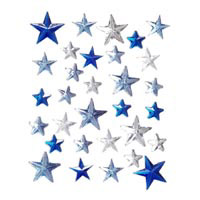 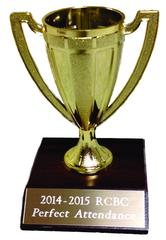 Back in elementary school, when dinosaurs roamed Queens Boulevard along with the buses, they’d give out “commendation cards” in school. Practically every kid got one.


These were nothing more than 3x5 cards with your name written on them.  They were the evolutionary predecessor of the useless “participation trophy” that every kid gets today, just for being you.


Back then, if you did a good job at something, teacher would paste a stick-on gold star.  A lot of kids had no stars because they didn’t do anything worth mentioning and this seemed somehow unfair.  So the educational geniuses who ran the New York City public school system decided maybe kids who weren’t gold-star ready could be recognized anyway.  That’s when they started awarding silver stick on stars.


Soon, everyone had one.  Silver was the new gold.  Well, not everyone.  Everyone except Willie and Freddy.  They just didn’t do anything to deserve a silver star.  But they didn’t disrupt the class, either. At least not most of the time.  So the educational geniuses of the New York City school system came up with the red star. They gave you one of those just for showing up and not pulling a knife.  There’s something really scary about a fourth grader with a knife.


After that, everyone had a star of some kind.  Everyone. This act of teacher rebellion never reached the educrats so no one clamped down on Miss Ascerno and Mrs. Grossfeld.  Eventually, the blue star went viral.


Wait. That’s not quite right. In those days, nothing went viral but viruses.  So they didn’t go viral. They just spread.


Today there are no Woolworths.  So the major source of stick on stars has dried up. And there are scarce few teachers who prefix their names with “miss” or “mrs.” But you can pick up little plastic trophies for next to nothing at Amazon.  So now, you get a trophy for just showing up.  And it’s not just in school anymore.


Meaningless awards abound.  No child left behind.  No need to achieve anything.  The children of that earlier era are now nearing or have entered retirement.  They don’t have mantles full of crummy plastic trophies.  But if you’re younger, you can trace the history of trophy-making right there on your shelf.


With each corporate takeover, trophy production moved. First it was back to Japan, then Korea, then China, then Vietnam, then Indonesia then Soweto and finally back to New Jersey where they affixed their own version of stick-on stars to every trophy.  These said “proudly made in the USA,” displayed a mini American flag and in teeeeeny tiiiiiny type the line “some components imported.”


Now you get a trophy for just being the wonderful kid you are.  And Mattel is rumored expanding the trophy division to other awards like the Oscars, Emmys, Tonys, Grammys, and the Purple Heart.


I’m Wes Richards. My opinions are my own but you’re welcome to them. ®
Please address comments to wesrichards@gmail.com
All sponsored content on this page is award winning parody.