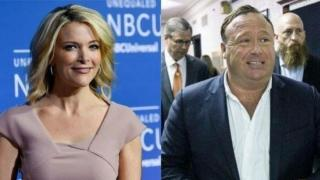 Somewhere in the great beyond, Uncle Miltie and David Brinkley are laughing. Finally -- finally! -- NBC has made a personnel mistake more bone headed than theirs.

They paid Milton Berle 27 of the 30 year contract to do absolutely nothing.  They couldn’t agree on a contract with the “washed up” Brinkley thus losing him to ABC where he re-invented Sundays.

Now they have to figure out what to do with the Ultimate Kelly Girl.  Oh, wait. Megan Kelly has an actual contract, not one of those temp things they used to like to do at NBC.

And they’ve aimed her at CBS’ 60 Minutes, which is the number one-watched news show in America today and maybe in the history of TV news.  This is going after an armored personnel carrier with a water pistol.

She proved she’s not ready for prime time by playing softball with Vladimir Putin, who immediately took control of his interview and said nothing. Maybe Vlad should offer her political asylum as he did to Jim Comey.

And then, there was last night. The “big” interview with Alex Jones who deserves less air time than your hyperactive Yorkshire Terrier.

With who?  Alex Jones, the guy who has a radio show and a website with such intriguing nonsense as denying the The Newtown school slaughter and “9/11 was an inside job.”

In other words an out of control conspiracy theorist who makes the 45th President of the United States look stable, a feat previously believed impossible.

She was gonna git him. She was gonna show America what a horror he is.  What she did was make the 290,000,000 Americans who never heard of Jones hear of Jones.

NBC had been flogging the interview all week. But by the time it hit air at 7 eastern last evening, it had been turned into a short piece filled with nonsensical narration and a few minutes of Jones bloviating about… well, it was hard to tell just what.

Cooler heads prevailed. The news division took its latest megastar failure and turned it into something close to an actual report.  At the last minute, as the clock was grinding toward air time, they made a very very very long news item out of it instead of the outing of a monster in his own words.

Either version of the program would have been unacceptable.  Bring on the Yorkie to bark for an hour.  More people will learn something valuable from that.

Jones is an early stage malignant melanoma. The way you get rid of those is not to let it grow on your nose or your arm until everyone can see it in all its ugliness, but to cut it out and then get regular checkups.

Kelly fled Fox but not before her late joining of the chorus that rightly got rid of Roger Ailes and Bill O’Reilly.  (Late, but not too late to get some ink.) And NBC hired her.

Then there’s the internals.  NBC bumped some heavy hitters to make budget space for Kelly.  And those left un-bumped can be resentful.  When your coworkers resent you they can do terrible damage, which is why they will quietly elevate Kelly down to some prime spot on some shopping or home improvement channel which is where she belongs.