1829 True Grit and the Rhinestone Cowboy 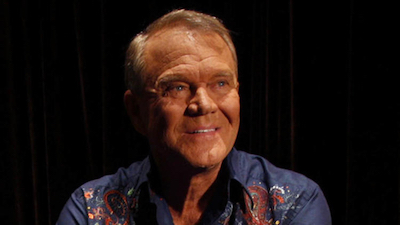 Alzheimer’s is a sneak thief. It steals the brain a little at a time.  So when we heard years ago that Glen Campbell was victim of a break in, we knew what was coming.  Still, it was a shock to hear that Campbell, 81, had died.


He didn’t go quietly. He didn’t go privately.  His fourth wife made sure he left a message along with his legacy.  The message was “this is what can happen. Be ready for it. There is no cure.”


Long before the signs of this grotesque affliction appeared, the Rhinestone Cowboy rode into Rockefeller Plaza and wowed the outdoor Today Show crowd with the songs everyone knew.  True Grit. Rhinestone Cowboy. Wichita Lineman. Gentle on My Mind.


This also was long before the Today Show turned into a daily marathon.  In those days it ended at 9am.  The performers at what we called the Friday Concert Series often stayed on for awhile afterward.  Sometimes, the audience and the performer were so into each other the show went on for awhile off camera.


And that morning -- it was somewhere in the mid 1990s -- Campbell stuck around, then plopped himself into a chair next to me and drank from a bottle of water.


He looked as he always did.  Vigorous. Youthful. But there was a hint of some cosmetic surgery. Nothing big. But up close, you notice.


I had some questions. Always do. Not about the face-tightening. Not about the drugs, the alcohol, the four marriages. The dalliance with Tanya Tucker.  That would have been rude.


Instead, the question was about how many violins there were on the original recording of Wichita Lineman.  The question surprised him. And then there was the one about his traveling with an electric 12 string guitar.  The big acoustics, he said, were too bulky for touring. Questions like that must have piqued his interest because the conversation went on long after most of the rest of the news people went home.


What was it like to work with John Wayne? (“What you see is what I saw.”) Do you really know all the cracks in the dirty sidewalks of Broadway? (“I didn’t write the Rhinestone Cowboy. But I researched it.”) I took that for a yes.


Once diagnosed, Campbell set out on a farewell tour.  It was a long farewell.  But he never got to the finish line.  After awhile the sneak thief took too much. He forgot lyrics in the middle of songs he had performed --what-- a thousand times?  Five thousand?


He was down. But not so far down that he couldn’t record that one final album.  In the recording studio there are endless retakes if you don’t get the words right or the guitar solo is filled with clinkers.


This is not genius. It’s not great art. It’s competence mixed with sincerity, familiarity and comfort.  And he evoked that in all of us.


We all knew yesterday would come, and so it did.  We knew we’d feel that tinge we feel when someone whose work has been part of our lives for what seems like forever dies. It’s shock, but not surprise.


Oh… and by the way, there were 23 violins in the orchestra for the original “Wichita Lineman” recording.  Got that fact from the Lineman’s mouth.


Gentle on My Mind: Vocal with Guitar Solo