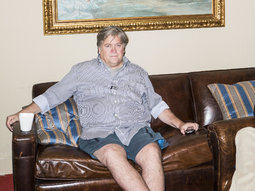 Stately, plump Steve Bannon came from the West Wing bearing a bowl of crazy on which a pen and a copy of his resignation lay crossed.


“You don’t know about me without you have read a website by the name of Breitbart, but that ain’t no matter.”


Bannon dropped the paper on John Kelly’s desk and said “I’ll go home and I’ll think of some way to get him back.  After all, tomorrow is another day.”


Okay. Enough of this. The first line here is from James Joyce’s Ulysses, the second from Mark Twain’s Huckleberry Finn and the third line closes Victor Fleming’s Gone with the Wind.


So goes the story of the obscure stately plump Bannon’s odyssey from the White House back to his website and likely his thoughts about Donald Trump and Trump’s latest temp worker and chief of staff John Kelly.


All of a sudden the wild man Bannon is a free agent, ready for any team to sign. Looks like he’s playing for Breitbart again, at least during the current off season.  Let’s see who signs him when the real fun -- the 2018 campaign -- starts, probably in a month or two.


Bannon and Kelly “agreed” that it was time for Bannon to go.  Trump is his own “chief strategist” along with being his own Secretaries of state, defense, education, commerce, energy, homeland security and his own press secretary. But he’s not his own chief of staff.  We have to wait and see what comes next in the coup within the coup.


Still, the president has taken on  a lot of jobs for an essentially lazy slug.  But at least for the moment, he has Kelly, Stalin to his inner Lenin.


Did Bannon leave behind that bowl of crazy over which his pen and resignation letter lay?  Probably not.  But he did leave the can of Barbasol from which its contents came.


GRAPESHOT:
-Do the skinheads, Klanspersons and neo Nazis realize that the sheets they wear, the swastikas on their arms and the electric shavers they use to keep their heads shiny are all made in China?


SHRAPNEL:
--When one of the Murdoch boys pledged $1 million to the ACLU after Trump’s standup routine on Charlottesville, many believed his Fox News might be evolving.  We saw headlines like “Fox veering left.” Don’t get carried away or hold your breath in anticipation.


--The people who run the New York subway system (and yes, there are such people even though at the moment they are all asleep somewhere on a stalled Q Train) have realized there’s something that looks like a Confederate Flag embedded in a tile wall at the Times Square station.  They’re planning to get rid of it.  Not a bad Idea, fellas, but there are higher priorities for the subways now… like making the trains actually run.