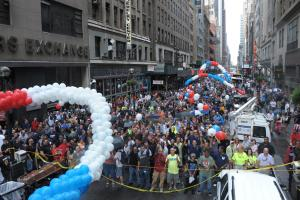 It used to take hours.  Now, it goes by so fast you hardly notice it.  The Labor Day parade is as anemic as the labor unions themselves.

And some of it’s their own fault.  Grown fat in the industrial economy, miners, factory workers, electricians, carpenters, stone masons, telephone and power linemen and the AFL itself have allowed themselves to be shrunk.

Sure, some of that’s the fault of all those trade agreements and the moving of production to far eastern slave states that has contributed.  Sure there are corrupt leaders (aren’t there in any large organization?) and wimps in high union office.  But mostly the problem is self inflicted.

Once a major union abandons the option of an effective strike, its history.

Executive compensation has skyrocketed in recent decades. That’s largely because there’s so much corporate profit kicking around the boardroom.  It’s spent on two or ten individuals who don’t need it rather than the 2,000 or 10,000 workers who do.

Staffing minimums? Gone. Defined benefit pensions? Gone.  Sane working hours? Gone.  And safety? Well, everyone pledges that.  But we still get more than our share of factory fires and nuclear power plant meltdowns.

And, yes, if the chicken workers unionize, there will be slightly fewer chickens for sale at slightly higher prices. But worker shoppers also will have more to spend.

The Great Universal MBA in its present form is nonsense.

(Digression:  Do you know why Shakespeare said to kill all the lawyers?  It’s because the MBA had not yet been invented.)

But as Pogo once said, “We have met the enemy and he is us.”

Labor contracts are not only about wages and benefits. They are about work rules. And work rules have more of an effect on the average worker than money and pensions.

Organized labor has been attacked on many levels for many decades.  That’s because ownership (even hedge funds and other mystical financial types) realize that workers want some -- just some -- control over their lives for 40 or more hours a week.

And the sad part of it all is the working stiff has been conditioned to believe the claptrap flung at them by companies that want “...to be personally in touch with their ‘associates.’” (No one is an employee anymore. We’re “associates,” a word that once meant little more than low level organized crime figures and was used primarily in court.)

What they want is the right to send you home after a half shift, to change your hours at random, things that keep you at their whimsical mercy.

And the “associates” have no say in that. Unless they’re organized.  So what are you waiting for?


© WJR 2017 (SAG-AFTRA, NABET, WGA, Wire Service Guild [ret] but I still have my green eyeshade and copy of the AP Stylebook and the one I slipped into my briefcase while touring what used to be UPI.)
- September 04, 2017