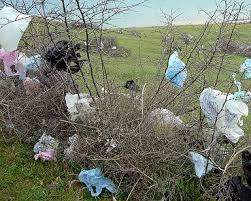 The controversy over plastic grocery bags has finally died down some.  Yes, yes. Let’s all be good citizens and not throw these earth killers into the landfill where they’ll outlive all of us.


Some municipalities are banning them. Some of merchants are charging a few cents to discourage us from using them.  And the so- called shopping “clubs” don’t use them at all, making it attractive to pay fifty bucks a year to buy discounted Cheerios in -- ahem -- plastic bags that hold enough to fill your coal bin if you decide that burning oats will reduce your carbon footprint, which no one knows for sure is true.


There’s a slight advantage to burning Cheerios as opposed to some other fuels.  Lighter, for example. Cleaner going down the chute to the coal bin.  But then you have the plastic bag problem all over again.


Every place that uses a large number of plastic bags has a recycle bin where you can return them. Supposedly, they’re melted down and re-formed into new ones.


The recyclable bags have caused problems of their own.  They are flimsy.  They tear easily.  A head of lettuce or a cantaloupe even one without sharp edges will rip through them with ease.  And how many lettuce heads and cantaloupes have any edges at all.


Fact is, you can cut one of these bags with nothing more than a sharp look.  So to protect your groceries, kindly and sympathetic checkout people will double the bags.  Sometimes that even works.  You can get your lettuce home and only the inner bag is torn.


Carrots are another story entirely.  Carrots -- especially those you buy by the bunch rather than the bag -- are the unsung secret weapons of the parking lot defenseless.  You see a little old person loading the trunk with plastic bags and say “easy target for robbery!”


Don’t be too sure.  The intended victim could pull the carrots through the prefab hole in the bag and stab you before you even know what sliced you.


And don’t bother running off.  Police are well trained to canvas the hospitals and clinics for people who come in with carrot wounds.


The best part about these bags is you don’t have to worry that your toddlers will consider them a toy and stick their heads in and suffocate.  No one has ever died of grocery bag suffocation.  At least no one willing to go on the record about it.


These things are so porous you can drop them in the cells of inmates on suicide watch.

SHRAPNEL:
--Someone finally noticed there’s now a “Bio Hazard” sign posted in the room where these masterpieces of blather are concocted.  Why? Well, it’s of a reminder of the power of words… and besides, there was no “Nuclear Waste Dump” sign available.


--For the first time in recent memory, the Emmy awards show was worth watching. Colbert was first rate as MC, had a truly funny opening monologue including a cameo from the real Sean Spicer. And the thing was paced perfectly, not a minute wasted.


--Well, maybe part of a minute. In the requisite obituary department the TV Academy said goodbye to a long list of household names including Roger Ailes. Guess they were trying to be fair and balanced.


TODAY’S QUOTE:
“At long last, Mr. President, here’s your Emmy.” -- Actor Alec Baldwin who played trump on Saturday Night Live.  trump had been nominated for Emmys for his role in “the Apprentice,” but failed to win and claimed the voting was fixed. To paraphrase Baldwin: to win an Emmy, you have first to win the popular vote.