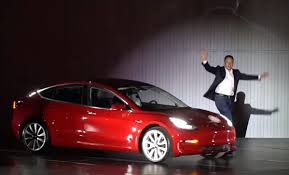 Corporate honchos periodically hold teleconferences with stock analysts.  The idea is to answer questions and tell them what to expect so they can recommend appropriately to clients and burnish their commission checks if their predictions pan out, which they don’t much seem to.

So, here’s Elon Musk.  He’s making batteries, planning trips to distant planets and making an occasional Tesla car, some days even two or three.  He’s on the phone with the Wall Street crowd.  And they ask him about production problems.

Seems reasonable.  A bunch of Stockbillies want to know about production.  Tesla has mastered many previously “impossible” problems in the building of a fully electric car that runs more like a Corvette than a Model T.

What he hasn’t mastered is producing enough of them fast enough to satisfy demand.  So, okay with the newness and the innovation.  But behind the curve with something the rest of the auto industry has been reasonably good at for more than a century.

Improving production costs money. Lots of money.  And here’s Musk pawning the silverware and looking for those ads where Montel Williams offers you quick cash in your account “by tomorrow.”

So when Musk told them to buzz off about production problems, the tears began to flow.

TODAY’S QUOTE:
“We have no interest in satisfying the desires of day traders.”

The day traders got busy thereafter, hence the stock hit. And Musk turned on the questioners when he called the questions boring.

Not the way to avoid Montel, Elon.

The takeaway:  Do your own analysis. You can’t be wronger than the consensus.  And think twice about what it means to be a public company with a lot of smart outfits going private.  Even if it means raiding their kids’ trust funds.

GRAPESHOT:
-The world needs more major-key peppy chamber music and fewer dour minor-key tearjerkers that sound like the music for Gregorian chants and Bach on Quaaludes.

SHRAPNEL:
--So, Swedish meatballs originated in Turkey?  But that’s okay because some Turkeys come from Mexico.  When trump finds that out, he’ll skip the traditional Thanksgiving Day turkey pardon.

Bankruptcy Sale to Begin
Cambridge Analytica announced today that its office furniture and other fixtures will be available for sale at the DC Armory in Washington starting Wednesday, May 16, 2018.

We have some of the latest lightly used computer terminals and towers, snazzy desks and a wide selection of Eames chairs ranging from their famed “Mail Clerk” edition. Also available: A rarely used 2016 Aston Martin armored SUV (MSRP $3 million.) Make an offer.  And 15 terabytes of legally obtained (wink, wink) data on the voting habits of residents in Scarsdale, NY, Shaker Heights, OH and Bentonville, AR.

I’m Wes Richards. My opinions are my own but you’re welcome to them. ®
Please address comments to wesrichards@gmail.com
All sponsored content on this page is parody.
© WJR 2018