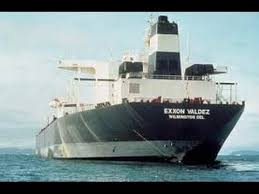 1946 ReXXon 2.0
When the guy lecturing you on truth and ethics headed an oil company worth more than the gross domestic product of Pakistan something seems off kilter.  But that’s what former Secretary of State Rex Tillerson did the other day and he had a point.

ReXXon, as he’s known to readers of this site, addressed graduates of Virginia Military Institute and warned against ethical failures and made up facts, something he was forced at times to do as CEO of ExxonMobil and then Secretary of State working for The Man he’s said to have called a “F***ing moron.”

Take your wisdom where you find it. ReXXon was not the captain of his company ship Valdez, the one that set bird life back to the stone age and turned Prince William Sound into Prince William Silence. So you can’t blame him for that.

Here’s the single most important part of his speech:

If "our leaders seek to conceal the truth, or we as people become accepting of alternative realities that are no longer grounded in facts, then we as American citizens are on a pathway to relinquishing our freedom."

ReXXon’s mistake in accepting the job of running the State Department was that he thought he was going to run the State Department.  He was a guy used to having his orders followed. Why not? He was more important than Pakistan and dozens of smaller countries. But that job, like every other post in the trump cabinet, is only a placeholder so the Don of the crime family has someone to blame when things go wrong, which is most of the time.

Plus, at State, there were so many empty parking spaces it looked like the building was closed.  Which it pretty much was. So, who was going to follow those orders, Jared?

Who was it said during the JFK years the country’s focus was on seizing the future, while most of the time since it’s been about keeping our noses above water?  ReXX wants facts.  After all, they’re harder to twist than whims, which is how we’re being governed now.

You may hate Big Oil.  But you can’t argue with this:  they know how to get the stuff out of the ground and ship it hither and yon.  You may not like it.  But they get the job done, largely because they understand the job.

If ReXXon boned up on the way his predecessors got things done, he was misled.  If he thought he could stand up to the White House buzz saw and direct the department more or less as it should be directed, he was delusional.

Still, it’s nice to hear that he’s come around.  Or at least says he has.

And Rex, about that speech:  All your own work?

SHRAPNEL:
--ReXXon was not in charge at his company during the Valdez mess. So it’s unfair to blame him, and we don’t. But the corporate culture at ExxonMobil is another story.

--Tillerson came out from under the trump appointment cleaner than he went in.  This speech gave him the chance to say something important.  Had he said this stuff at this volume in his days as a government worker, he would have been put out to pasture before anything grew there.