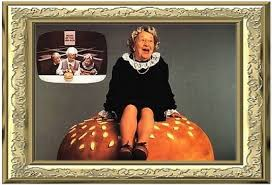 Clara Peller rose to fame by asking “Where’s the beef?” in commercials for the Wendy’s fast food restaurant chain.

No, no. Not that kind of beef.  The kind where you “settle this beef outside” if the bar or the malt shop is too crowded for a full-scale knock-down. Malt shops, should any be left, are no longer great venues for hooligans with chips on their shoulders. Bars, that’s another story.

But more to the point, where is your anger?  I mean look at what’s going on all around you and you’re holding it all in?  The president and the rest of his crime family have taken over this country and is dragging it down to third world status faster than can say “quid pro quo.”  Why aren’t you out there raging about this?

Yeah, there are other important issues in your life.  Like “what’s for dinner” or “boy was that a lousy Thanksgiving Day” when your plane to grandma’s ran five hours late and you had to slog through snow en route to the airport at 4 a.m.

Maybe you’re worried about health insurance or finding a second nickel to rub against the one you have left. Or climate change, the war in who-knows-what-istan, or the Mets or the crack in the ceiling you noticed during your semi-annual sexual encounter.

And maybe you should have a beef with all that stuff.  But don’t diversify. But all your beef in one basket… um...basket case, trump.

Sometimes, all of the michugas we’re going through now has an upside.  Here’s one example.

There is an “Express Bus Only” lane on Pennsylvania Avenue in Washington. The president has placed a lawn chair thereon. The lawn chair has a sign. It says “reserved for Mr. Giuliani.”  So, Rudy, have a seat.  After telling people to “go see Rudy” about his Ukraine nonsense, trump is ready to allow the express bus to mow his “personal lawyer” down.

When do we hear the president say “I really didn’t know the guy very well?”

Happens all the time with this guy. ReXXon was only the beginning.

Here’s an election era oddity. Former press secretary Sarah Huckabee says she doesn’t like being known as a liar. Well, Sarah, it would help if you hadn’t spent your entire tenure as press secretary lying.

ReXXon was the greatest Secretary of State since Thomas Jefferson (1790-1793.) Says... nobody. An oil tycoon with business interests galore in Russia.  Now what?

Here’s the central question, whether or not you’re an American Exceptionalist: Do you want Belgium, China, Russia and Who-knows-what-istan to think of us as one of their own or as a world power? The US is a world power.  But we’re fast becoming Alsace-Loraine or -- even worse -- Monoao or Surinam, Venezuela, or a subsidiary of United Fruit, the one-time kings of Banana Republics.

Grapeshot:
-When Rudy is turned into a real two-dimensional caricature by a fast-moving MM-1 MTA bus, he’ll die like Liberace -- laughing all the way to the bank.

TODAY’S QUOTE:
- “Hello, suckers!” -- Texas Guinan (1884-1933), Stunningly attractive actress, entrepreneur and con artist who set the pace for generations of politicians and stunning female con artists and is donald trump’s secret role model even if he never heard of her.

I’m Wes Richards. My opinions are my own but you’re welcome to them. ®
Please send comments to wesrichards@gmail.com
© WJR 2019