4540 The LIRR Ain't the Wabash Cannonball 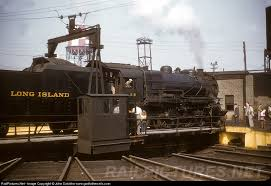 The LIRR’s last coal-burner when “on time” really meant “on time.” (From Steel Rails to the Sunrise)

Aw, c’mon, guys, give us a break.  The Long Island Railroad, busiest and most complicated commuter rail line in the country is out with its 2019 figures.  The headline? Best stats in three years. Yeah, right.

There were 18,976 delays in 2019. You read that right. Eighteen thousand, 976, according to the Newsday newspaper.  That’s 4,575 fewer than in 2018.  A train is considered “on time” when it is fewer than five minutes and 59 seconds behind time at its terminal. All railroads build in that seemingly minuscule buffer of varying numbers.

Question asker:  When does the train arrive at its destination?
Answerer: When the doors open on the platform of the last scheduled stop.

In this case, the The question asker and Answerer are the same person.

Not fair, you say?  Okay here’s the answer from the railroad: “Well, um, sometimes when it platforms. But, um, sometimes when it switches from the incoming main track to the one that leads to the platform.”  There’s many a slip between these seemingly seamless motions. The train may hit the East River Tunnel more or less on time and barrel into the switch point.  It’s checked in there.  But often it stops while the LIRR and Amtrak rail controllers have a platform conference:

“I don’t know, Jack, which platform should we use?”  “Uh, I dunno, Jill, wait a minute and I’ll check.”  “Okay,” Jack continues four minutes later, “let’s go for track 18.” And so it does, arriving at the platform ten minutes behind schedule.  And it’s another couple of minutes or more before the conductor or assistant conductor -- formerly known as a “trainman” until they started hiring women for the job about a million years ago -- makes his or her way to the controls that open the doors.

This routine has gone on for this particular train for 60 years. And the end result always is the same: Track 18.

You are now about 12 minutes late. But your train, technically, was “on time.”

This kind of thing is cyclical.  This railroad predates steam engines. It’s a mixture of nine different smaller railroads that eventually merged into one company, was acquired by the Pennsylvania Railroad which had absolutely no business doing that, and eventually when to the State of New York when Governor Nelson Rockefeller got up in front of a bunch of news people and civic leaders and pronounced the LIRR “The best commuter railroad in the nation.”  Rocky took a lot of derision for that self-evidently wrong statement.  But things did get better. Eventually.  Somewhat.

The old Pullman cars, comfortable as they were, were replaced by Budd Cars.  Sleek, modern, less comfortable and beleaguered by the same antiquated switches, signals and tracks that had bothered their predecessors.

There’s no way this Rube Goldberg-inspired railroad can work any better than it did in 2019.  There is no way the MTA or the magic of Christopher, the former Saint of Travel can do anything about this mess.

But you will find, as you always have found, commuters grateful for the relief of subjecting themselves to almost 19-thousand delays a year.  Because the alternatives are worse.  Ask anyone who’s ever driven the Long Island Expressway or Northern State/Grand Central Parkway between 4:30 and 10 am on a weekday.

I’m Wes Richards. My opinions are my own but you’re welcome to them.
Comments including some weak-weasel defense of the LIRR to wesrichards@gmail.com
© WJR 2020