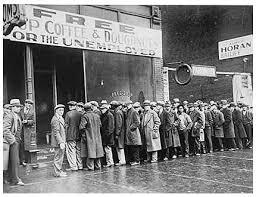 This is from the Great Depression. Could it be from a crystal ball instead of an archive?

Unemployment is lower than four percent.  It’s a fake figure because it doesn’t include those who no longer are looking for work and miscounts gig and part time workers.  The cost of living remains relatively low.  But the figures don’t include fuel or food, stuff we all have to buy.  If you don’t believe that, take a look at the prices in your supermarket.

You may be able to buy a new car or a washing machine or a Gulfstream for not much more than last year’s price.  But you can’t say the same about a dozen eggs or a loaf of plastic white bread.

Retailers had a red, red Christmas.  That’s worse than a blue, blue Christmas.  Part of that is because the gift buying season was shorter than usual. But another part is that you haven’t been to a traditional department store since Tickle Me Elmo was the hottest selling toy and Amazon-dot-com bought Zappos.

But we’ve saved the worst news for last.  Manufacturing is in an actual, measurable, definable contraction.  And while there are plenty of jobs in the service industry, that doesn’t mean much.  The push for a higher minimum wage and the market-based “scarcity” of workers has kept low wage jobs plentiful, especially in the service industry.

If you’re in one of those jobs, don’t expect a meaningful raise. Ever.  Why would any boss agree to one?  You are all interchangeable. You don’t like it?  You know where the exit is. And don’t forget to leave your Whoopie Burger uniform in the locker room.

Wages rose an average of 2.9 percent in 2019. The increase in Social Security payments this year is 2.8. Close enough.

But the defrocked CEO of Boeing, maker of the airplane version of clown cars walks away with a $60 million payoff.  Like Liberace, he’s laughing all the way to the bank.

Executive compensation is a whole ‘nuther ball game.  It would help if we could stop giving raises to executives whose companies aren’t performing.

It also would help if when CEOs are malfeasant, they’d go to jail for it. They tried it with Martha Stewart.  It didn’t work.  They tried in a less “official” way to do it with Paula Deen. It didn’t work either. But celebrity chefs and lifestyle mavens aren’t as important as thieves who run scams on their employees -- like the “I had a rough childhood” cowards at Enron or Boeing or Madoff Investments.

Plunk a few of these guys and gals in a real prison, and you’ll find a whole lot fewer of them on the outside when they’ve done their time.

I’m Wes Richards. My opinions are my own but you’re welcome to them. ®
Comments to wesrichards@gmail.com
© WJR 2020

Y ou may think this is an a-bomb but it isn’t. It’s just a teenager reacting to a perceived slight.   Old saw: When a dog bites a man...