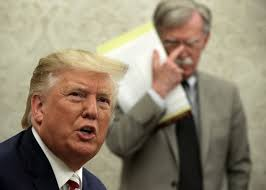 Bolton, right, appears to be thinking “What the Hell have I gotten myself in to?”

Surprise, surprise!  All of a sudden, ousted National Security Adviser John Bolton has drafted a book that supposedly reveals state secrets and threatens the security of the US.

But trump’s handlers didn’t name them.  If they did, they’d be guilty of the same charge. Only worse. Bolton’s book hasn’t been published.  At last a show of caution from the white house.  But the strategy is older than time. Block the book, save trump’s skin.

It’s possible the charge and its sub-headline are true.  But it’s not likely.  Bolton respects precedent and the institutions of government. Saying anything nice about the nation’s most infamous war-hawk isn’t easy.

This issue is going to duck-waddle through the courts for a while. Look for a Mueller Report-like redactions.  But ultimately, the book will be published.

Our leading bad guy has become an impeachment crowd rock star. And he should be.  Unlike the fluttering of the president, Bolton is a Very Stable Evil thinker.

The trump lawyer Dershowitz continues on the long downward spiral that started when he began representing the worst of our high level lowlifes… people like OJ, Von Bulow, Mike Tyson and Jeffrey Epstein. Dersh says with a straight face that accusations against trump are not impeachable offenses.  This is open to interpretation.

Well, Starr WAS dean of a law school, Pepperdine, the right wing college that seems more like Ace Technical School than, say, Yale. Unable to do sufficient damage in California, he became president of Baylor where he was “close to” a student who was “accused of” sexual misconduct.

SHRAPNEL:
-- New York radio DJ Harry Harrison has died from a combined bunch of health issues at 89-ish.  He was a pleasure to listen to and a pleasure to work with.  But before meeting him and working with him, I was told not to mention that “I listened to you as a kid,” which I did. So I didn’t say it.

--Harry was on WMCA, the locally owned, family owned full service A.M. teapot. Then he made it to the real big time, WABC which at the time was to radio as Ford and Chevy were to cars… and Formica was to furniture. But it was later at CBS/FM that he solidified his role as New York’s “Morning Mayor.
I’m Wes Richards. My opinions are my own but you’re welcome to them.
Comments?  Send ‘em here: wesrichards@gmail.com
© WJR 2020