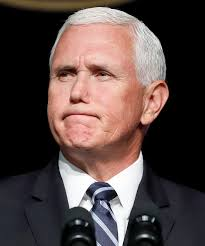 I just unwrapped the stuff from Amazon. Now, where do I install these funny little roundish things?

Mike Pence joined Amazon Prime the other day. Gets free shipping and fast delivery on stuff he buys. He searched the website and because he has limited ability to spell and click boxes sought help from his wife: "Mother, how do you spell "balls?"

He ordered a pair, read the quick start guide and installed them.  Then he went to work.  It isn't tough work he does.  What does it take, after all, to open a bunch of envelopes and count ballots?

The Ultimate Sycophant could no longer syc. It took a riot.  But now, at least, we have a president-elect and all that implies.

Did the trump riot at the US Capitol building shock you?  Good. You needed that. We all did.  Else how would the horror that we have inflicted on ourselves starting in 2016 end? How would the boil have been lanced?  How would the cancer have been excised?

This was like 9/11.  It was like Pearl Harbor. It was like the battle of Ft. Sumter.  Someone had to give us a whack upside the head.  Okay, thanks. You have our attention now.

There are three basic classes of political evil at work in America.  And it’s time to act against all of them.

1.  The soon to be ex-president and his immediate though ever-shifting. Ever shifting and at once shiftless.  Time to go. In handcuffs if possible. Maybe in chains or giant butterfly nets.

2.  Their “ordinary” followers, people you know, whose trump worship you tolerate, whose ramblings that you impotently respond to by doing nothing more than turning your back and walking away instead of answering them in kind.

These are some members of the third group:

--High ranking officials like Mitch McConnell who isn’t nearly as stupid as he looks or sounds and who makes the legislative end of trumpism work while allegedly demeaning it in private.

--Lowlifes in congress like “The Senator from Texas,” who got into both Yale and Harvard because they want to be seen as broad-minded, not because of accomplishment or intelligence.

--Lower lowlifes in state and local government who from the safety of gerrymandered bunkers and foxholes goad those above them in the chain of authority to continue the Screw America movement that the rest of us now have a chance to stop.

Start with the 25th Amendment and excise the tumor. With his new Amazon Prime purchase in place, even a bottom feeder like Pence can steer the ship of state for the few days between now and when the grownups move back into the White House.

Wessays begins the year with a twice-weekly schedule. We’ll see you on Tuesday and Friday mornings before Noon, Eastern.

Motivational speaker and discoverer of Jewish Space Lasers Marjorie Taylor Green.   So, who showed up at the Million Moron March on Wa...