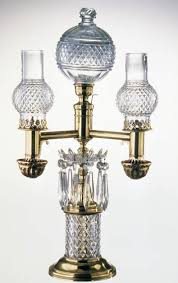 Where did Dolley Madison get this Argand Lamp, which burned brighter than the candles they used to light the White House in the early 1800s?

When the present president exits the White House, what will he take with him.  Certainly, his clothing and shoes, his spray tan equipment and his supply of Sharpie pens.

Of course, from time to time, outgoing presidents have packed a few things that don’t belong to them and somehow have ended up under glass in their presidential libraries.

James Madison may have slipped out the door with one of those fancy Argan Lamps which burned much brighter than the customary candles and oil lamps of his day.  But we must remember that Adams had to buy his own furniture, so there’s evidence he walked out with tables and chairs he’d brought in.

Nixon may have had a few official trinkets in his pockets when he quit and ran.

Bill Clinton took his gifts when he left but had to return some of them because they were meant by their donors to remain in federal custody.

We want to think of our presidents as meeting a higher standard of ethics.  At least that’s the inference we read in traditional history books.

Some presidents, though, were kleptomaniacs of a different order.  They stole things not from the physical White House but from the American People.

Nixon stole confidence in the office.

Just to be sure everything is as and where it should be, someone inventory the knives, forks and spoons. Count the silverware.  And maybe keep an eye on the plates, bowls and bath towels.

--With trump out of office, it’s time for the Republican Party to get on the couch for some good 50-minute hours of the talking cure. It could be a good time to be in the cult-deprogramming business.  And you can set that up to work on Zoom.

--The National Association of Musical Merchants, NAMM for short, is about to open its 2021 convention in Anaheim.  That’s when nervous factory owners parade the latest in their endless array of planned obsolescence. It’s up to us to decide the difference between innovation and gimmickry.